Bordeaux is to France what Napa Valley and Sonoma are to the States—a wine country paradise along its country's southwestern coast home to some of the world’s most famous vineyards. There's more to France, however, than its most-visited vino locale. From the birthplace of rosé to the sparkling capital of Champagne, here are eight wine regions that should definitely be on your radar. 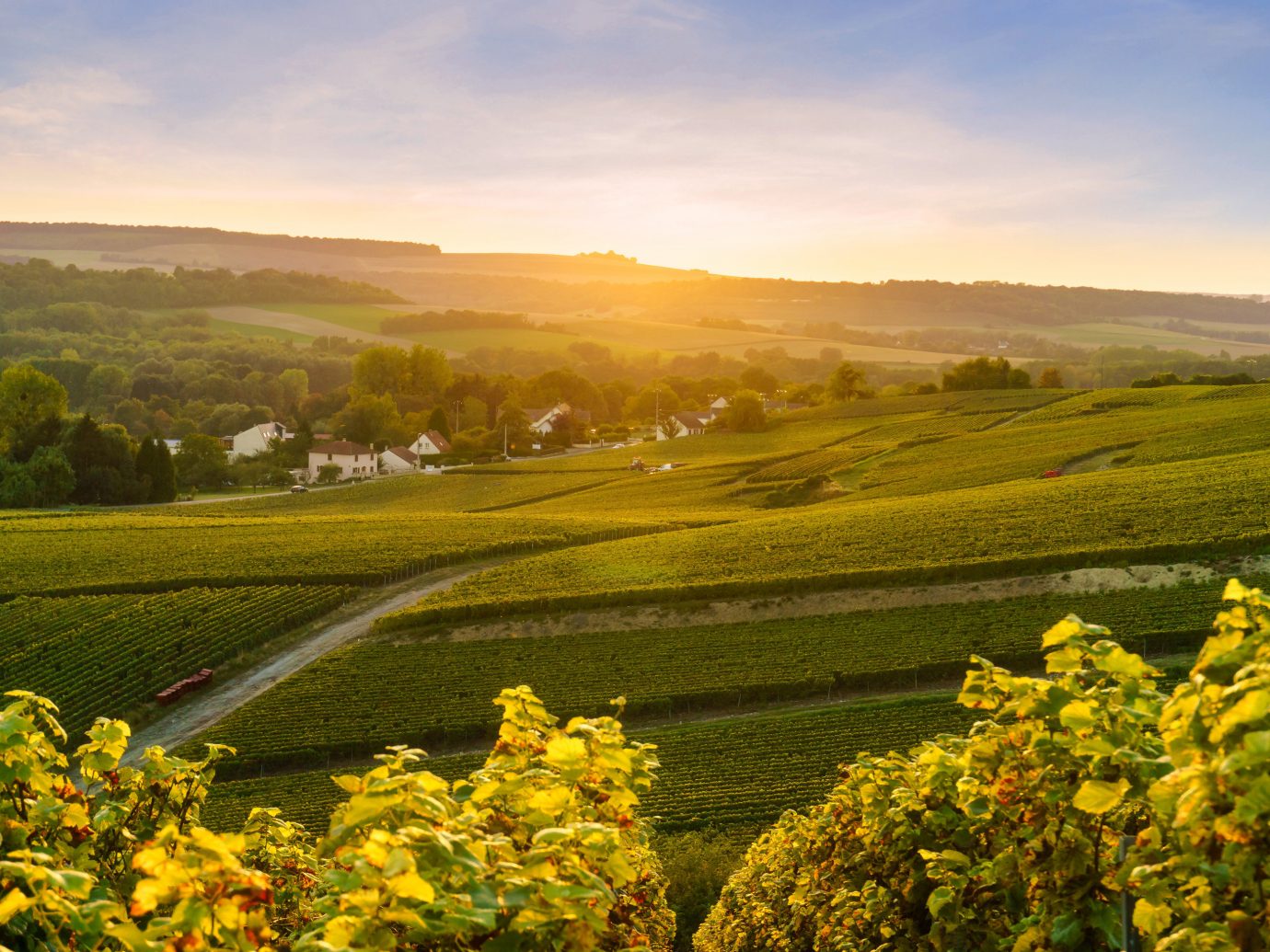 Despite the fact that nearly three billion coupes of Champagne are sipped around the globe each year, this wine region has never gotten the same kind of love as the castle-covered Loire—despite being just a 40-minute fast-train ride from Paris. Start in the unofficial capital of Reims, home to major maisons (Champagne houses) like Veuve Clicquot, Pommery, and Mumm. Over 300 miles of trails snake their way through the region’s vineyards along the Champagne Tourist Route, but if you only have time to visit one winery, make a reservation at the region's oldest, Maison Ruinart, where you can tour 800-year-old chalk quarries turned Champagne cellars that wind their way 125 feet underground. For something on the more artisanal side, rent a car and head to the neighboring town of Œuilly, where three generations still reign over family-run Champagne Tarlant. (Recognize the name? Tarlant's bottles are featured in some of the world’s finest eateries, from L’Arpège in Paris to Noma in Copenhagen.) Back in Reims, start the evening with tapas at laid-back Le Coq Rouge or save your appetite for the tasting menu at haute Japanese-French fusion eatery Racine. When you’re ready to retreat for the night, rest your head in one of two top picks: the 33-room L’Assiette Champenoise (known for its lauded, three-Michelin-starred restaurant) or stately Chateau Les Crayères, whose glass-encased Bar La Rotonde boasts a 600+ bottle Champagne list. 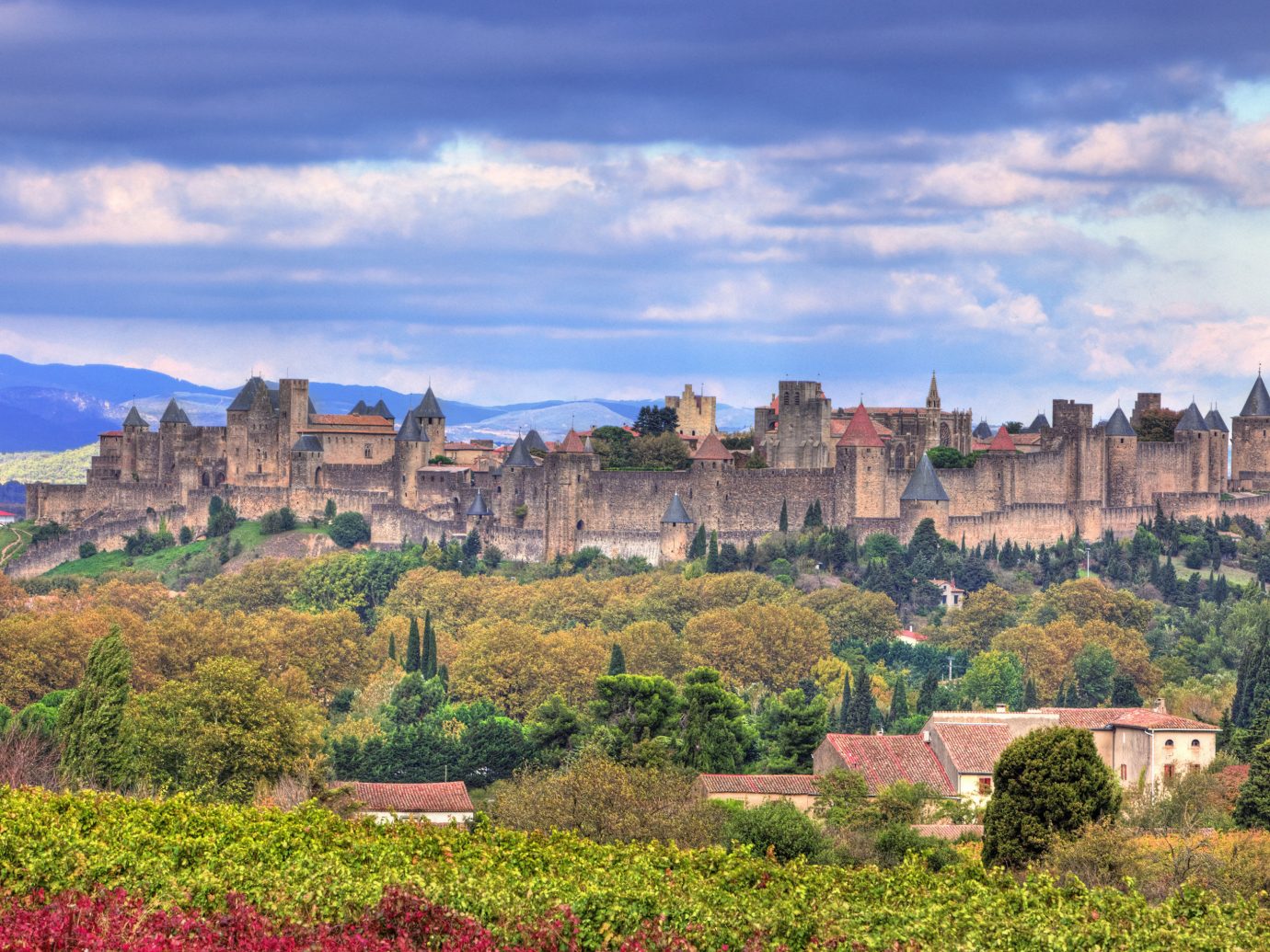 Champagne steals the spotlight when it comes to sparkling wine, but Dom Pérignon—the monk credited with “inventing” Champagne—was actually inspired in the town of Limoux, in Languedoc. Languedoc-Roussillon encompasses the largest wine region on the globe and has long moved past its days as a “wine lake” of mass-produced vino for France’s troops. More recently, biodynamic winemakers like Gérard Bertrand (who oversees nine estates alone) have helped turn this region’s reputation around thanks to annual events like the wine-themed Jazz Festival. Make Château l’Hospitalet—Bertrand’s 38-room hotel and winery—your base, then set off to explore sites such as the fairytale-esque hilltop town of Carcassonne (whose 12th-century château inspired Sleeping Beauty) and the cotton-candy-pink salt marshes of Le Salin de Gruissan. Just next door, rosé-fueled afternoons seep into evening apéros (pre-dinner drinks) at boho-chic beach bar Mamamouchi. For something more formal, spend the night in Carcassonne at Hôtel de la Cité, where you’ll find La Barbacane, the only Michelin-starred restaurant within the medieval citadel’s walls. 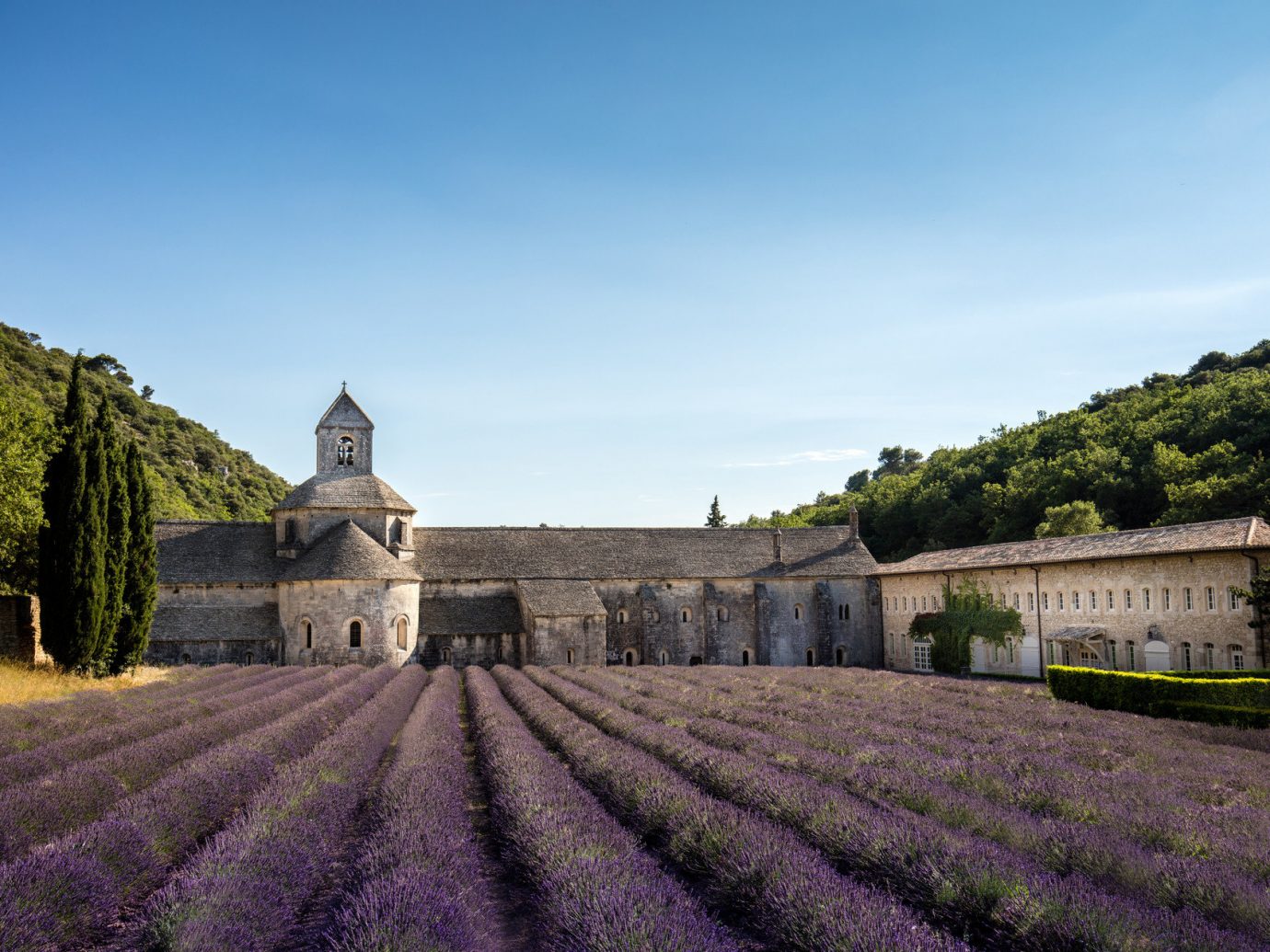 #Yeswayrosé may be summer's trendiest hashtag, but this phrase is one that Provence has been heralding for centuries since Greeks first arrived with vines in 600 B.C. Home to the world's largest region specializing in rosé, the lavender-filled fields of Provence open up to gorgeous vineyards where the summertime rosé craze is a year-round affair. Rent a car and make your way to two of Provence’s most famous wineries, Minuty and Château d’Esclans, where the first "haute rosé" (titled Whispering Angel) is blended and bottled. Looking to squeeze in some fitness between tasting sessions? Hike the trails surrounding Château Gassier’s organic vineyards, nested at the foot of Mont Sainte-Victoire, or embark on a 155-mile cycling and yoga tour with Ride & Seek, pausing to sample Provençal specialties like tapenades and truffles along the way. End the day near Avignon at truffle hotspot and hotel La Beaugravière in Mondragon, which produces the majority of France’s black winter truffles. Otherwise, make your way to the coast to La Réserve Ramatuelle, an idyllic seaside retreat tucked away in the hills near St. Tropez offering just 14 villas and luxe amenities from butler service to private chefs. 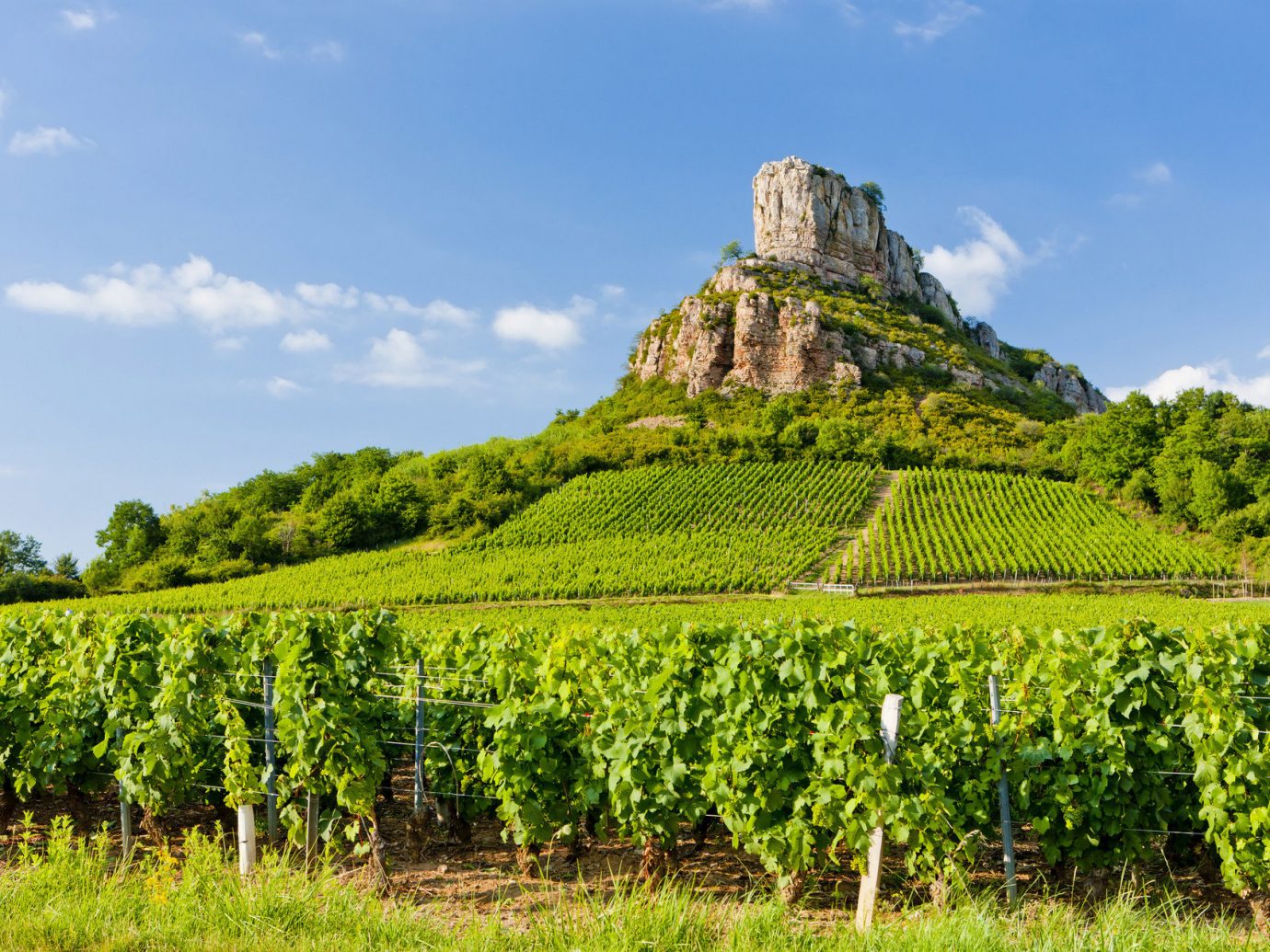 Ah, Bourgogne, the land of Chardonnay and Pinot Noir. This sliver in northeast France stretches 75 miles from Dijon in the north to Mâcon in the south and, despite being home to only three percent of France’s vines, grows some of the world’s most prized pinots. Begin in the region’s wine capital of Beaune at the 130-year-old, family-run Maison Joseph Drouhin, whose historical cellars sit underneath the city center. Burgundy is the true definition of terroir, and while the area’s wine is one way to get a sense of the land, food is another. (After all, this is the region known for classic stews like boeuf bourguignon and coq au vin.) Sample a few regional faves just 15 minutes from Beaune at Ferme-Auberge de la Ruchotte, an organic farm and inn housed in a 19th-century hunting lodge. Back in town, chef Mourad Haddouche also weaves farm-fresh fare into dishes at his Michelin-starred restaurant, Loiseau des Vignes. It wouldn’t be a wine town without wine bars, and La Dilettante (which doubles as a gourmet market) is one of the local hot spots. From Beaune, hit the road and head north on the hour-and-a-half drive to Chablis, a town that could easily be the backdrop in Beauty and the Beast. Peruse the cellars of Domaine Laroche, which has been aging wines since the Middle Ages, and tour the 9th-century Obédiencerie monastery where Chablis was born before getting to the main attraction: a wine tasting followed by a picnic (packed with Chablis, of course) right in Laroche’s vineyards. Come sundown, rest your head (and palette) at L’Hôtel du Vieux Moulin, a modern hotel housed in an 18th-century mill overlooking the picturesque Grand Cru hill. 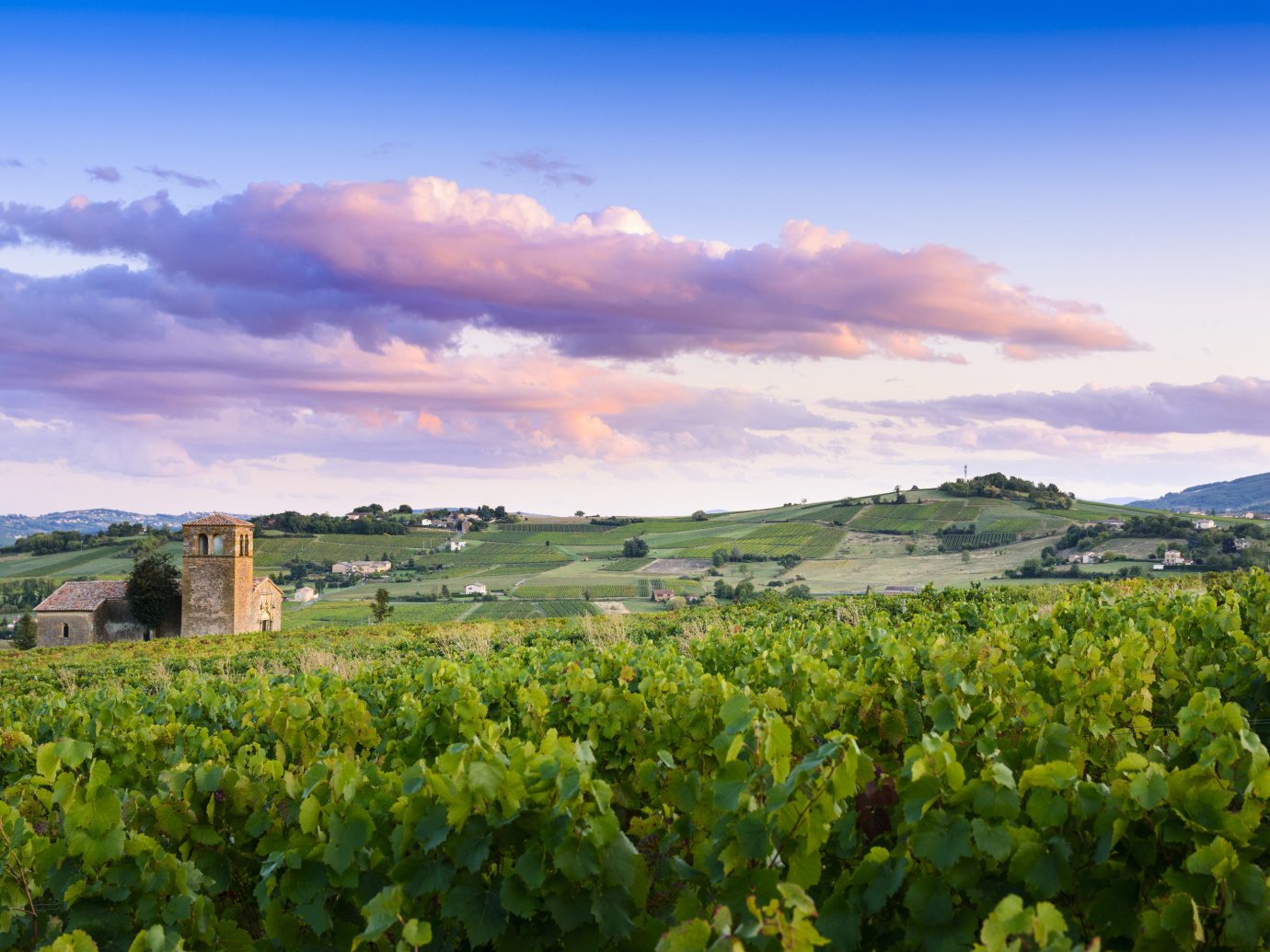 Beaujolais Nouveau Day, the third Thursday of November, is now fêted around the globe as a way to honor the newest vintage of the light, fruity wine (which has recently morphed from cheap to chic). Straddling the lines between Burgundy and the Rhône, Beaujolais wines were once a favorite of nearby Lyon before spreading up to Paris, thanks to the introduction of the railroad in the 19th century. Now, stations like Romanèche-Thorins are home to museums and the wine version of Disneyland, Hameau Dubœuf, which celebrates its 25th anniversary this year. For something more low-key, arrange a visit to Moulin-à-Vent, one of the 10 Crus of Beaujolais named after the area’s landmark old windmill. Then, rendezvous at family-owned Château du Moulin-à-Vent for a wine tasting before heading to dinner at Rouge et Blanc, where the region’s signature Gamay grapes serve as the star ingredient for the sauce drizzled on seared foie gras. You can soak up some of Beaujolais’ history with a stay in 800-year-old Château de Bagnols in the heart of the vineyards, whose 27 suites were named after a few of the fortification’s famous guests.

RELATED: The 18 Most Beautiful Places in Europe to Add to Your Bucket List 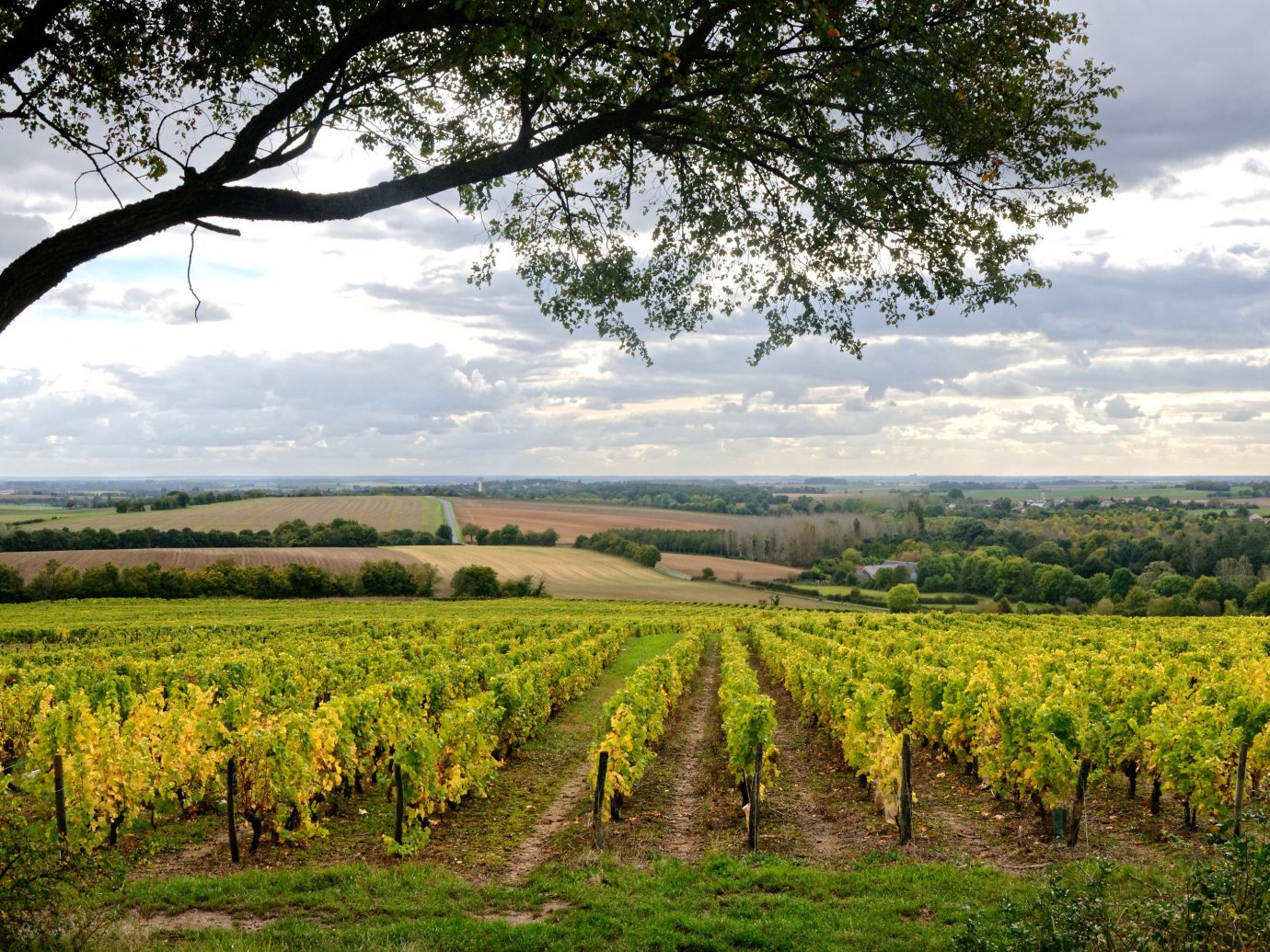 Stretching over 600 miles from Nantes (the gateway city) to Sancerre, the Loire Valley is the longest wine route in France and just as famous for its châteaux as its wines. Castles lining the “Valley of the Kings” open up as museums honoring famous residents like Leonardo da Vinci (who called the former royal residence Le Clos Lucé home) in addition to gastronomic restaurants like Saumur’s seasonally focused La Table du Château Gratien. Over 1,000 vineyards are open to the public, but we’ve helped narrow down the list to three top picks: Vignobles Mourat, Domaine des Gauletteries, and Domaine du Closel in Savennières. Bike paths line either side of the Loire river, but if you prefer sitting back and watching the castles drift by, hop on a boutique barge cruise with a liner like European Waterways. If you’d rather sleep between the vines than on the water, book a stay in Anjou at Domaine de la Soucherie, whose French country chic rooms are surrounded by the château’s sprawling vineyards. 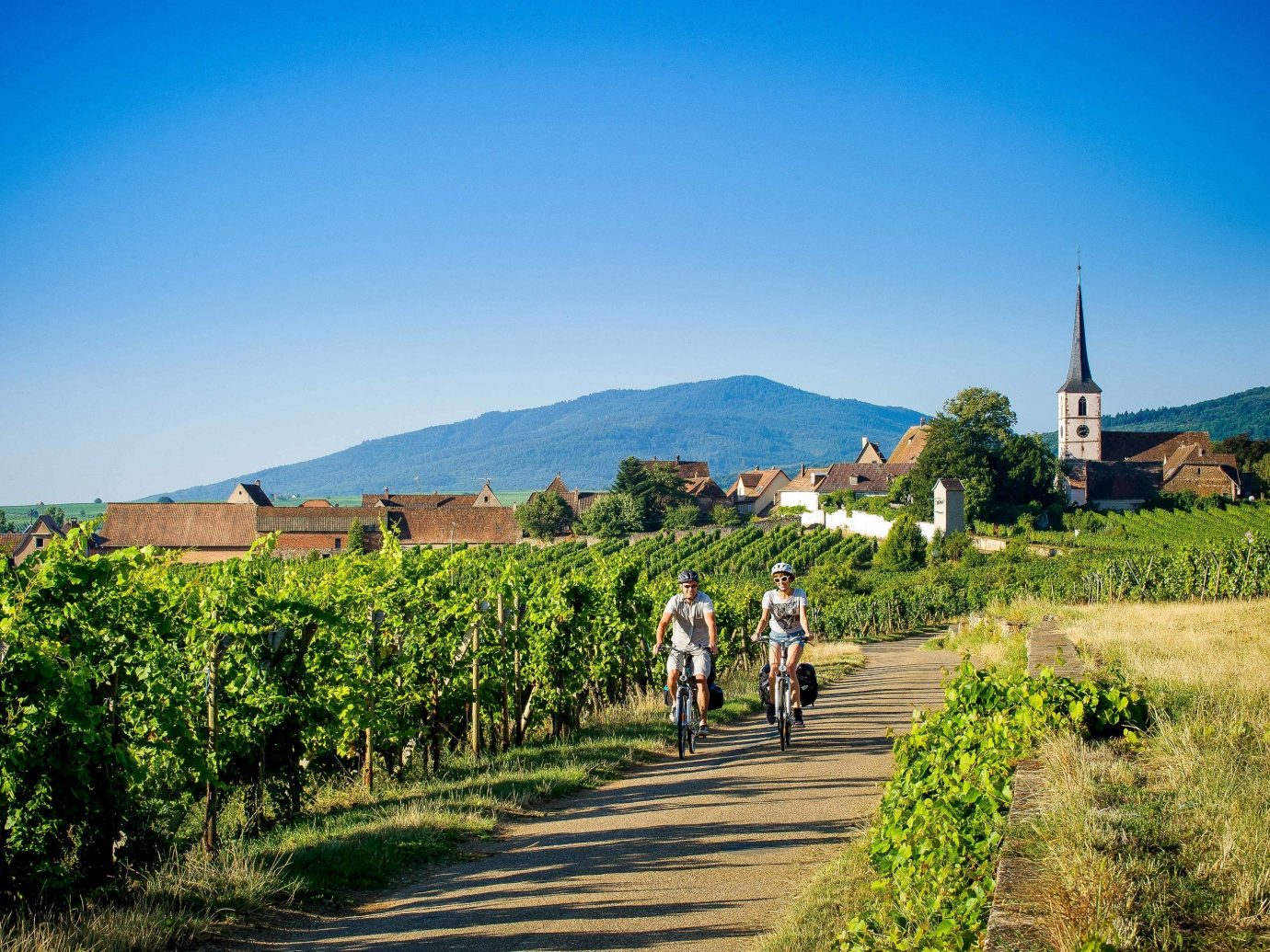 Alsace is one of those regions that even the French consider an idyllic vacation destination thanks to Disney-inspired towns like Colmar, whose Petite Venise of canals criss-cross through the Old Town. On the western banks of the Rhine, Strasbourg skirts the German border and is one of the only cities in France whose city center sits on an island. On Alsace’s Wine Route, fortresses and châteaux are interspersed between some of France’s most picturesque villages including Riquewihr (famous for its half-timbered medieval houses and tasting rooms). Trying to decide where to stop and sample some of the best Alsatian wine? Soak up the views and vino at Cattin on the winery’s 360-degree rooftop wine bar. When you’ve had your fill of Riesling for the day, post up in L’Auberge de l’Ile near Colmar, just 10 minutes off the route, where accommodations range from five-star suites to revamped riverside fishing cabins and even a 1970s airstream (all of which have access to the three-Michelin-starred restaurant).

The second-largest wine area in France, the Rhône Valley boasts a wine history stemming back 2,000 years. Today, the region extends from Vienne to Nîmes and Avignon and counts classics like Châteauneuf-du-Pape as part of its vino portfolio. Get your bearings in the gastronomic capital of Lyon, admiring views over the Rhône river from panoramic eatery Les Trois Dômes (whose wine menu is just as impressive as its starred cuisine). For something on the more modern (read: hipster) side, take a seat at vintage-inspired Les Raffineuses, a bistro by day and tapas bar by night. If you like the atmosphere, you can stay in a spot just as hip at the Philippe Starck-designed Mama Shelter Lyon (where Guy Savoy is chef de cuisine); otherwise, opt for luxe lodging at the 37-room Villa Maïa, a newish hotel perched on Fourvière hill where you can end your day at the hotel’s Roman bath-inspired spa (think grandiose marble columns and chaise lounges) before feasting on decadent fare like foie gras-infused French onion soup at Paul Bocus disciple Christian Têtedoie’s namesake eatery, Têtedoie.

What to Wear in France

Women’s Wrap Dress Outfit to Wear in a Lake Town

Women’s Night Out in NYC Outfit with Jeans in Autumn

Men’s Night Out in NYC Outfit

Women’s Swimsuit and Cover-Up to Wear to Florida Beaches

Men’s Swimsuit for a Sexy Hotel

8 Food Tours in Europe You Need to Take

The Most Romantic Getaways Under $300