Where to Eat, Sleep, and Play in Nuremberg, Germany

Nuremberg might lay claim to Germany's most famous Christmas Market, but there's so much more to discover in Bavaria's second-largest city. Between the gothic churches, timbered houses, and river-spanning stone bridges stand Michelin-starred restaurants, charming boutique hotels, and a compelling nightlife scene that together have helped reinvent this medieval city. JS editor Lindsey Olander hit the ground in search of Nuremberg's best tables, tours, and treasures you won't want to miss. 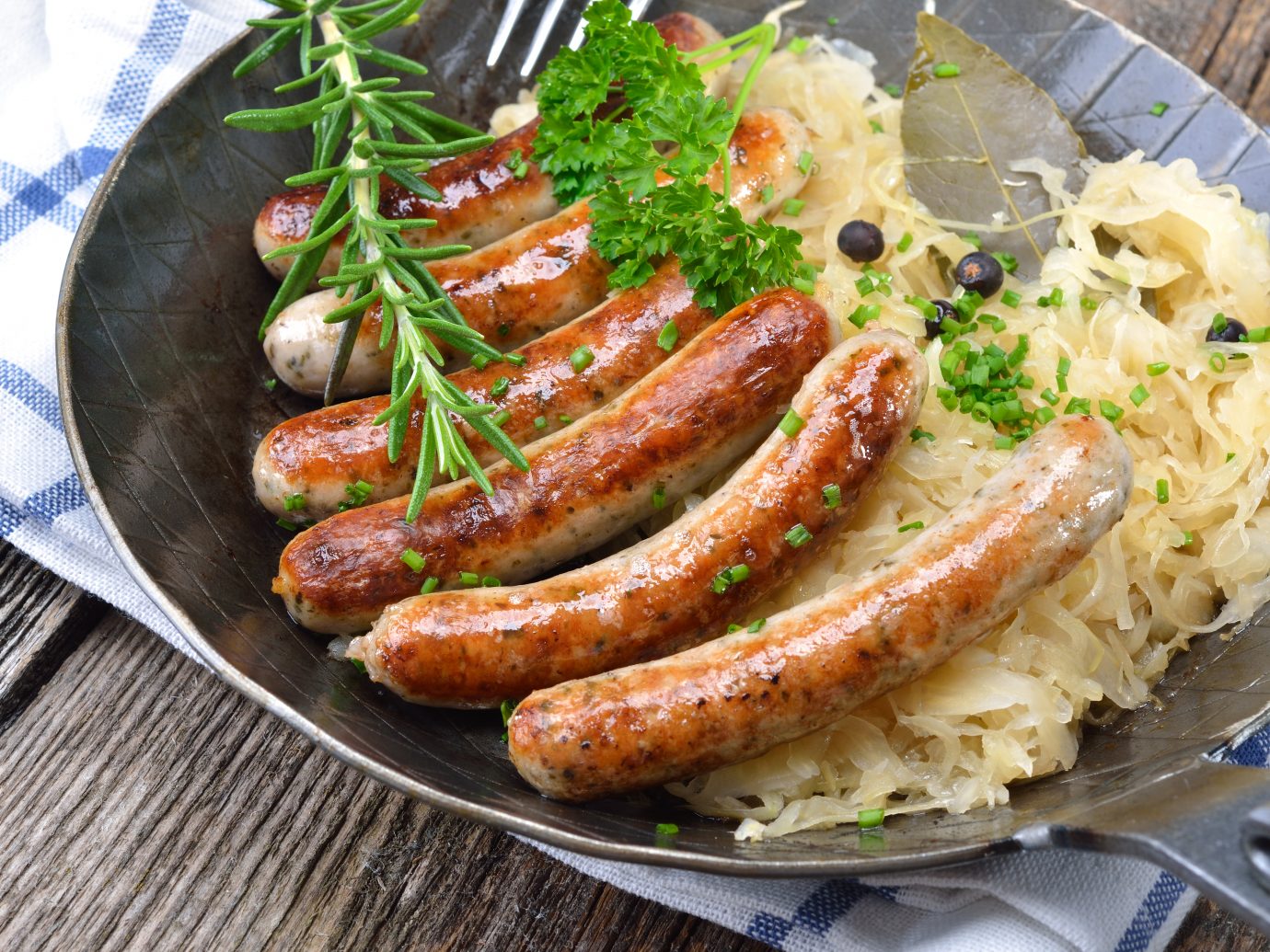 It doesn’t get more traditionally German than dining at Bratwurstglöcklein, a legendary local haunt in the craftsmen’s courtyard that’s been serving Nuremberg sausages on pewter platters since the 14th century (and as such, was once frequented by the likes of Albrecht Dürer and Hans Sachs). An in-house butcher is responsible for its signature würste, which, as dictated by Nuremberg law, are each no longer than 9 centimeters, no heavier than 25 grams, and spiced with marjoram. Pair yours with horseradish or mustard and healthy helpings of potato salad and sauerkraut.

The oldest restaurant in Nuremberg is also one of Germany’s best. The townhouse still retains much of the charm it had when it was built in 1550—low ceilings, period furnishings, bull’s-eye windows, a doorbell for guests to signal their arrival—but the menu is anything but outdated. Chef Andrée Köthe’s daily-changing, multi-course menus (four for lunch; six for dinner) does a special service to vegetables and spices: Arctic char with grapefruit and tomato, perhaps, or green beans with marinated grapes, pea sprouts, cucumber, coriander, and pistachio cream. The space is intimate—just 31 seats, all told—so reservations are essential.

Gostenhof might be liked to New York’s Brooklyn—a hip, vibrant neighborhood that’s become the trendiest place in town in live, eat, and hang out. At its heart is Hempels, a rustic burger joint and labor of love of owner Michael Gross that embodies the ethics of today: fresh, high-quality ingredients sourced from local gardens and animal-friendly farms. From the open kitchen comes sky-high sandwiches with both classic and creative: along with regular hamburgers and cheeseburgers, you can get a Hempels (goat cheese, balsamic red wine, onions, potato chips) or the Weltenbummler (avocado, feta, mango curry). Grab your order and bring to one of the wooden tables (built by Gross himself) lined up outside, where the people watching is prime. 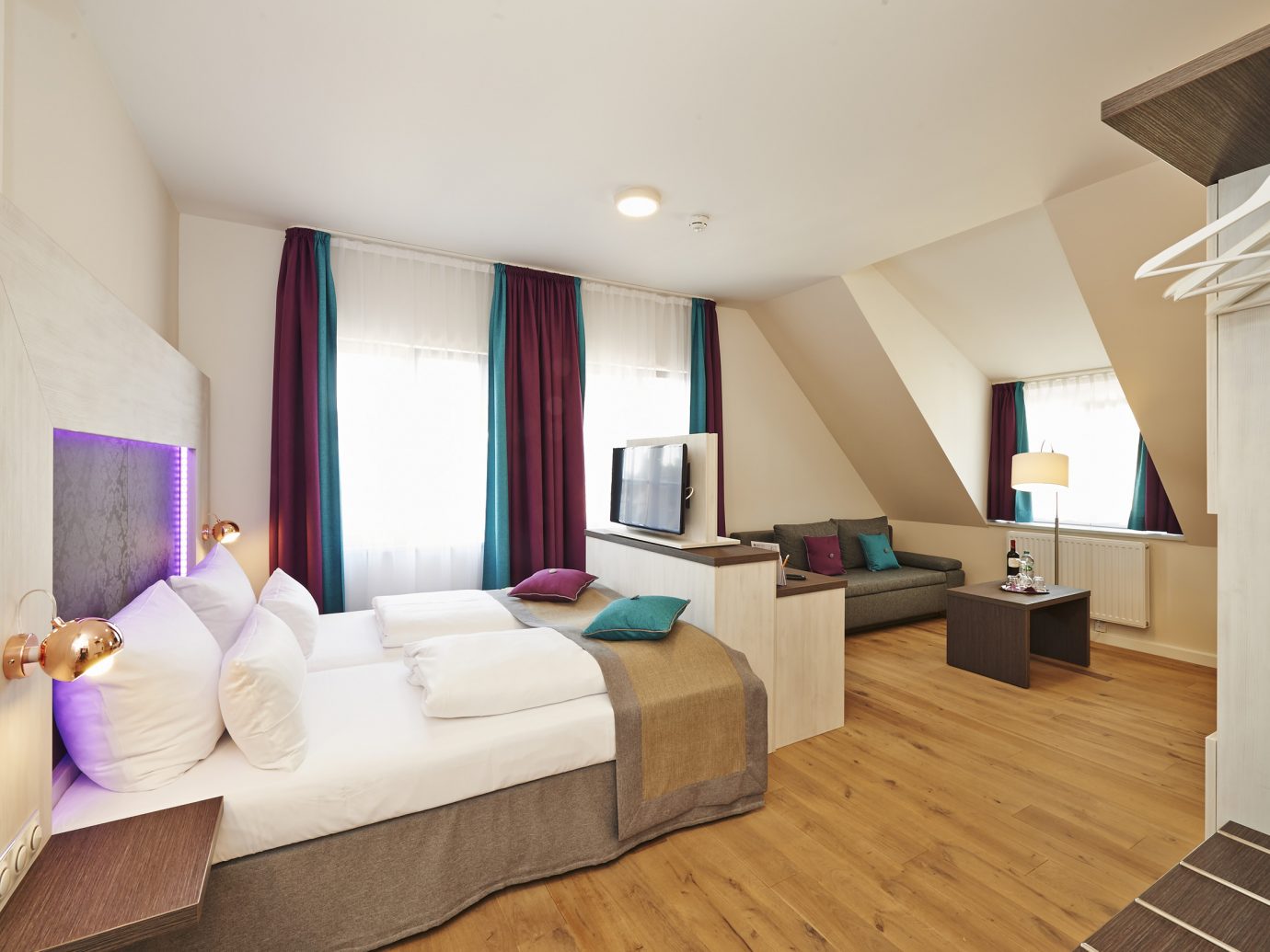 Undecided on whether you want more history or more 21st-century comforts in your Nuremberg sleep? At family-owned Hotel Elch, you'll find a bit of both. The original building—a half-timbered 14th-century townhouse—was recently expanded with a new boutique wing; all rooms and suites are rustic yet modern, with free WiFi, minibars, and some with original timber beams. Bonus: the castle, main market square, and the city's best restaurants are all close by.

First opened in 1896, the privately-owned Hotel Victoria has lost none of its allure. The 62 guest rooms are tasteful and modern; there's a pretty winter garden; La Terrazza, the terrace restaurant, serves up Italian staples along with a notable breakfast buffet; and everything else is within reach, from Nuremberg's storied nightlife to Old Town.

The name says it all: Design Hotel Vosteen, in the heart of the city, is one of Nuremberg’s most stylish boutique hotels. Behind its 1950s-era façade, you’ll find individually named guest rooms with equally unique décor—think patterned wallpapers, bright color schemes, French beds, and retro TV consoles.

It's not design-centric or historic by any stretch of the imagination, but if you're seeking a no-fuss stay within spitting distance of all the main attractions—including Nuremberg's old town walls and main train station—the Sheraton Carlton Hotel checks all the boxes. A trendy bar and restaurant, a spa with indoor pool and roof terrace featuring views over the city, and spacious rooms with roomy marble baths and (at least when we stayed) the most comfortable beds in Bavaria.

See All Hotels in Bavaria 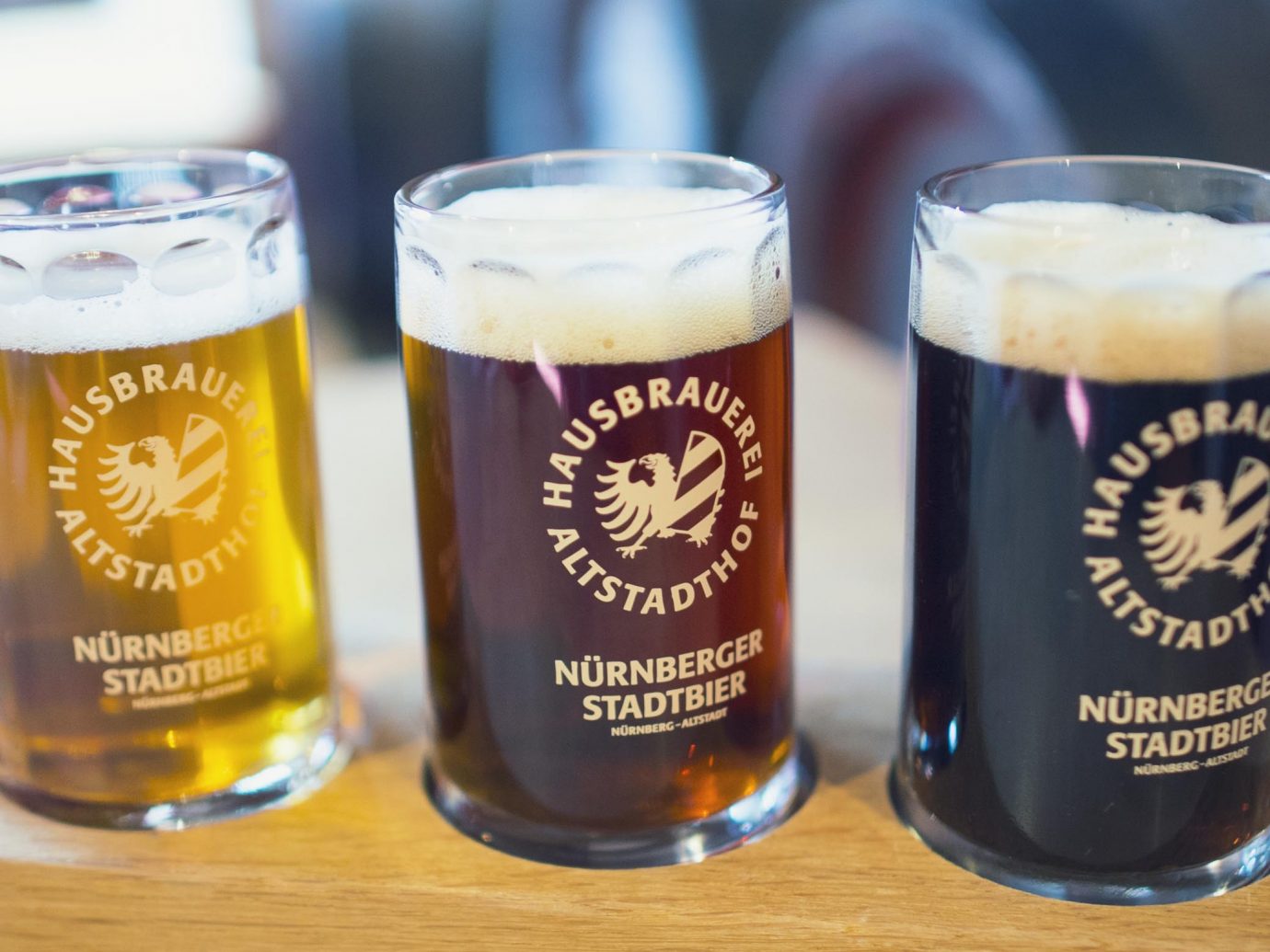 You can't visit the heart of Bavaria without getting a taste of their beer. At Altstadthof Brewery, you can take a tour of the copper kettles where their signature malty, red-hued Rotbier is produced, along with the deep dark network of underground rock cellars where beer was once stored back in 1700s. The restaurant is a convivial, pub-like spot for group dinners. If you're game, ask for a taste of their whiskies and gin.

Don't judge this nightclub by its size. Despite the close quarters, you won't find a better party in Nuremberg after 9 p.m., when the disco balls start spinning, the live music (or nightly DJ) starts jamming on the tiny stage, and the dance floor becomes standing-room only. The drinks list itself is impressive—take your pick from the over 200 choices of liquor, beer, cocktails, wine, or beer. 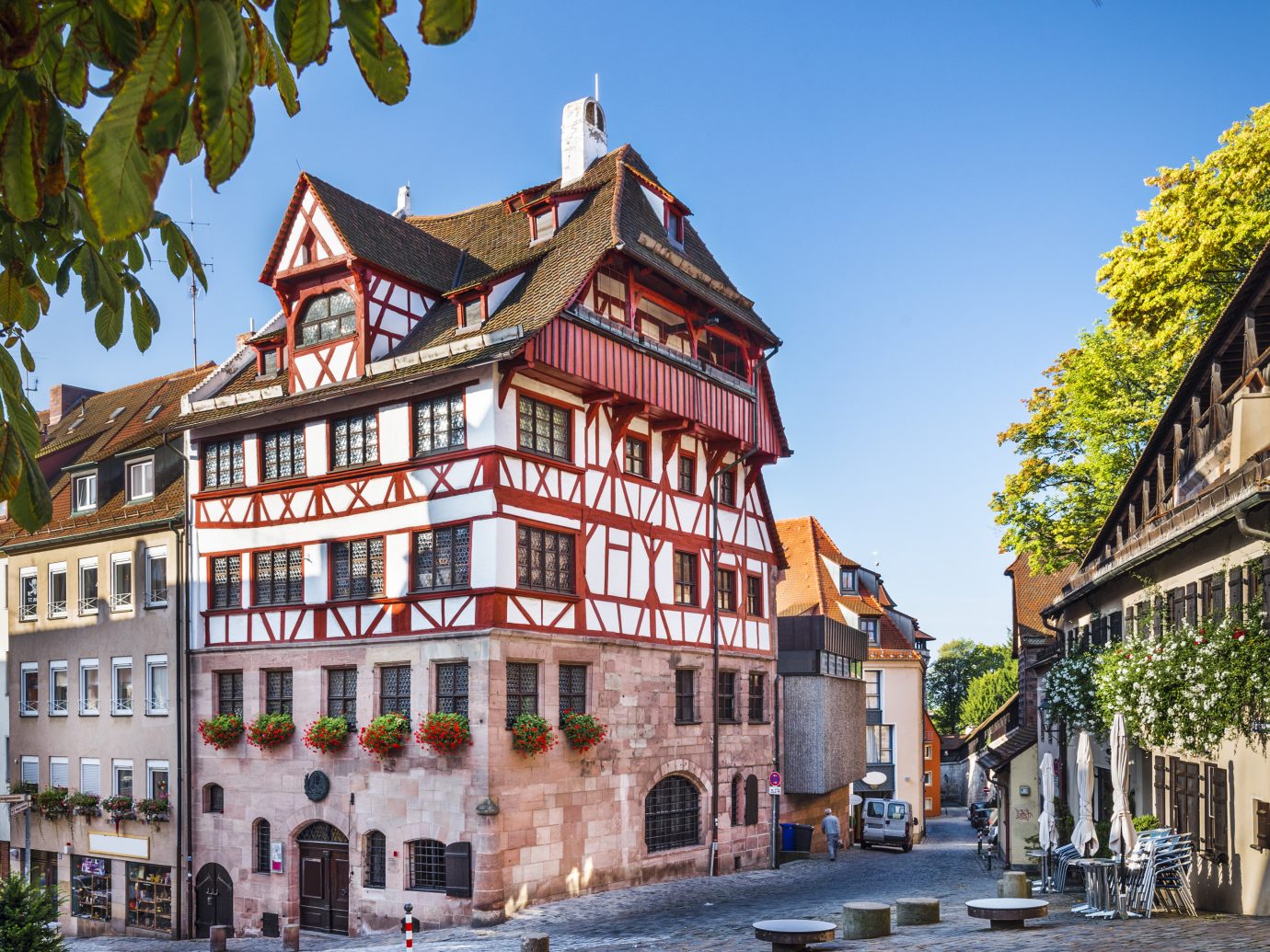 Despite the destruction it sustained during WWII, strolling through Nuremberg’s old town still feels like walking through medieval times. Steep, winding, cobbled streets are lined with half-timbered houses and workshops, all leading towards the skyline-defining Castle of Nuremberg—an imposing fortress complex that housed Germany’s kings and emperors as far back as 1050. Inside the castle walls, you’ll find old imperial stables built in 1495, stone towers, and the Kaiserburg, home to imperial halls, royal residential quarters (complete with painted ceilings and original oak beams), and a Romanesque double-height chapel where the Holy Roman Emperor would worship. Just down the street is another piece of history, albeit far more recent: the Kunstbunker, a climate-controlled beer cellar turned bomb shelter that protected priceless works of art (among them works by Dürer, church windows, and the German Crown Jewels) during WWII.

For a crash course on Germanic art and artifacts, it doesn’t get more comprehensive than the German National Museum, the nation’s largest collection of Teutonic culture. Among its staggering one-million-item permanent collection are historical documents and seals, musical instruments, armor, sculpture, toys, fine art (including over 300,000 illustrations and prints), and Neolithic tools that date all the way back to prehistory.

Nuremberg poster child and painter Albrecht Dürer did monumental things for German art while he lived and worked here during the 16th century. After an illuminating trip to Italy, he essentially brought back the Renaissance to his home country, introducing humanism into his paintings and illustrations—wrinkled hands; a hyper-realistic depiction of a hare—though it was his woodwork that truly shined. His four-story medieval workshop near the castle is now a museum, where visitors can visit his recreated studio and print shop and a gallery of both replica and original work in the attic.

Even if you’re not a history buff, it’s well worth venturing to the outskirts of the city to experience Nuremberg’s Documentation Center—arguably Germany’s most important museum—whose 19-room exhibition titled “Fascination and Terror” tackles the history, politics, and “whys” behind the rise of Hitler and the Third Reich. The adjacent Zeppelin Field, where the largest Nazi Party rallies were conducted, is another moving window into that period. Today, in defiance of what happened here during the 1930s, it acts as a popular setting for huge pop and rock music concerts and festivals. 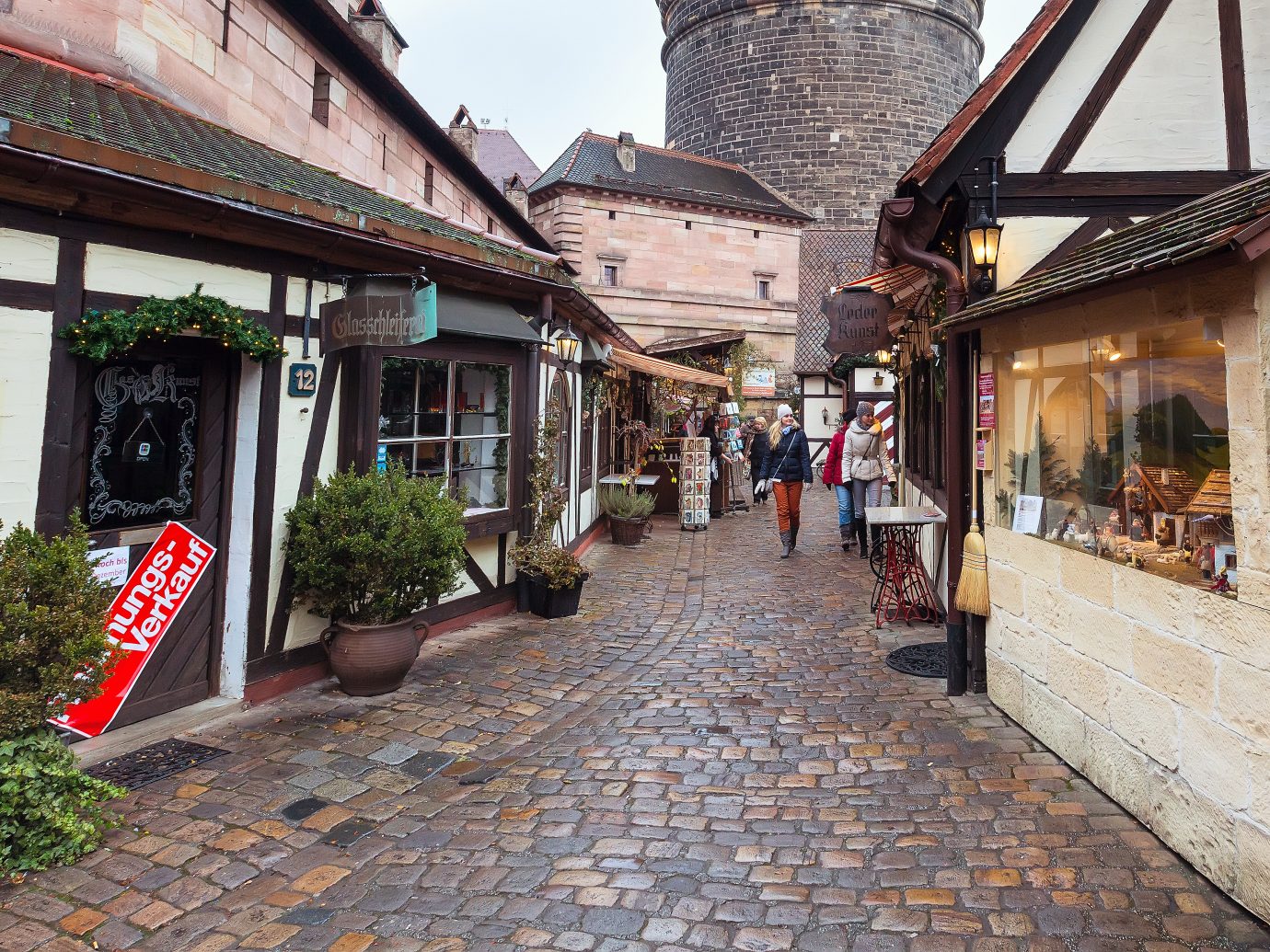 Step through the Old Town gate and you’ll be transported to the Middle Ages, when artisans used their unique skills—passed down through their family for generations—to handcraft everything from glassware and wooden toys to pewter wares and baskets. This tiny village-within-the-city comprises a concentration of workshops where the city’s best leather workers, silversmiths, and woodcarvers peddle their creations. If you’re looking for a traditional, one-of-a-kind souvenir, look nowhere else.

For two weeks during winter, the main square in the heart of Old Town is taken over by the world-famous Christkindlsmarkt, which welcomes more than a million visitors a year with its ornament-peddling stands, mulled wine vendors, and twinkling lights. The rest of the year, however, is just as magical. At the square’s east end sits the Gothic Frauenkirche; at its opposite corner is the 60-foot-tall tiered Schöner Brunnen (Beautiful Fountain), whose gold ring—when twisted—is said to bring good luck. Come here to browse stalls selling fresh produce as well as a litter of storefronts selling jewelry and antiques.

Sitting inside one of the sole surviving buildings following the war, Wicklein remains the oldest gingerbread bakery in Nuremberg—it can trace its roots all the way back to the 1600s, when a master baker invented the recipe they still use today (including spices like anise, fennel, cardamom, cinnamon, coriander, and—unique to Nuremberg gingerbread—a communion wafer). In preparation for and throughout the holiday season, Wicklein bakes up to 3 million gingerbread a day. During the slower seasons, you can stop in for a hands-on lesson with a shop assistant.

15 Kitchen Supplies No Home Cook Should Live Without

Where to Spend Winter in Europe: 8 Dreamy Trips You’ll Want to Squeeze Into Your Calendar

The Best Hotels in St. Kitts and Nevis