Hidden Beaches in Mexico You Need to Know About

With its 6,000 miles of coastline and endless oceanfront retreats, it’s no wonder why Mexico is one of the most popular beach destinations to get away. Beyond Cabo and Cancún, there are scores of secret stretches that have untouched palm-lined sands, crystalline cenotes, and, perhaps best of all, not a spring breaker in sight. Here, our seven favorite beaches south of the border.

Chelsea is Brooklyn-based travel writer, editor, and photographer. When not home eating her way through NYC, she's gallivanting across the globe, sailing the coast of Croatia or hiking the peaks of Peru. Her superpowers include booking flight deals and sleeping in small plane seats.

Don’t let the flight to Cancún fool you. Your final destination, a two-hour drive north and a 20-minute ferry ride, leaves you far removed from the party-hardy, Señor Frog’s-filled Yucatán Peninsula. Here, it’s all about laid-back beach vibes and lazy afternoons spent napping in a hammock over coral sands. The untouched island is mostly an ecological preserve of clear lagoons and palm-fringed shores, which protects resident wildlife like flamingos, dolphins, white pelicans, and even whale sharks (go between May and September to swim with them). What you can explore on land—villages of palapa-roof casitas, remote sandy roads, and private beaches—you’ll have to do by bike or foot (the island is car-free). 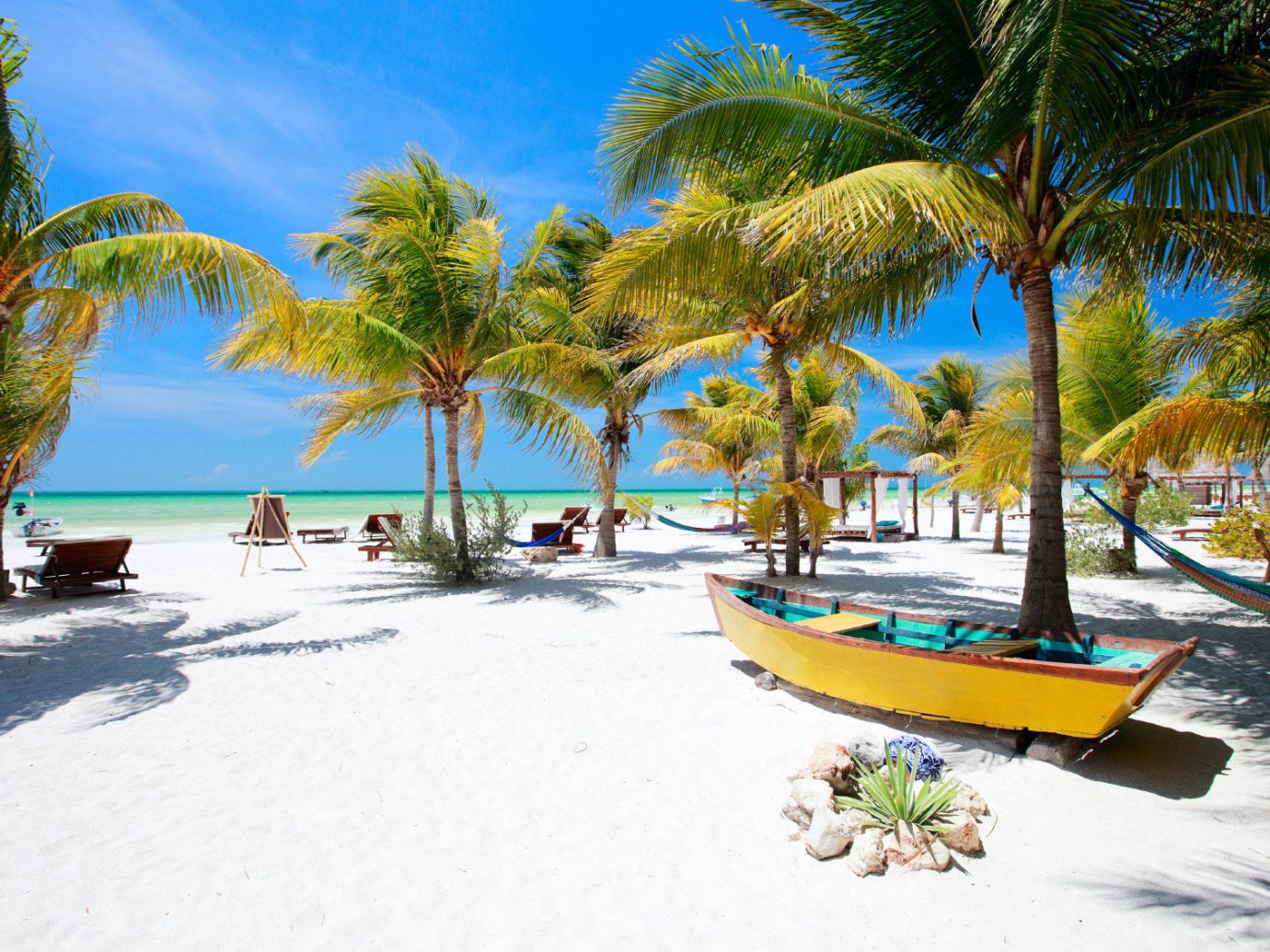 For the ultimate R&R, leave your bags (and your worries) behind at Casa Las Tortugas, a boutique hotel of boho-chic bungalows facing the Mexican Gulf’s turquoise waters. While you’re here, visit the on-site Agua Spa to indulge in a lemon body treatment inspired by 4,000-year-old Yucatan traditions.

The Pacific coastline along Oaxaca has always attracted the bronzed and beautiful, but if you’re interested in more low-key pursuits, skip Zipolite’s famed nude beach and hippie town for pristine Playa San Agustin. Just 75 minutes east, an overgrown dirt road will spit you out at a secret cove bordered by Huatulco National Park. This mile-long crescent, one of nine bays in Huatulco, attracts surfers with its perfect pipelines and uncrowded sands. On placid days, slip on your fins and snorkel around the large coral reef, which teems with tropical fish and turtles, then kick back at one of the beachfront seafood shacks for fresh ceviche and line-caught snapper.

Sometimes the best gems are hiding right under our noses. Such is the case of Cabo Corrientes, a 45-mile shoreline southwest of Puerto Vallarta. Hugging the Bay of Banderas, this untamed stretch is home to rugged mountains, lush forests, and a string of wild, windswept beaches, some of which can only be reached by boat. Start at Playa Las Animas, and make Hotelito Mio—a group of eight open-air villas nestled away on a private beach—your home base. Nearby, Yelapa is the most crowded section, but continue on down the coast and you’ll find Playa Corrales, with its historic century-old lighthouse marking the tip of the region. Further south is Playa Mayto, a romantic, gold-sand arc ringed by palm trees and soft Pacific breezes, as well as Tehuamixtle, a sleepy fisherman’s village. Adventurous types will want to end at Villa Del Mar, the last pearl on the chain, to go horseback riding through the cobalt water.

Upon first glance, La Paz isn’t exactly the image of a beach getaway. Surrounded by arid desert and spiky cacti, this quiet oasis on the Baja California Peninsula almost seems like a mirage—especially when compared to its high-octane neighbor, Cabo San Lucas. Colonial buildings, Mexican-style murals, and the Malecón promenade all add to the colorful flair of Baja’s capital. Its main attraction, however, is Balandra Beach, a small inlet off the Bay of California with sculpted rock formations and a shallow pool of turquoise water that mirrors the cloudless sky above. Rent a kayak or paddle board to explore the glass-like bay (just make sure to go during high tide or you could be stranded). At the end of the day, retreat back to CostaBaja Resort and Spa, on the Sea of Cortez between La Paz and Bahia Balandra, to enjoy the 18-hole golf course, five restaurants, three infinity pools, and serene spa. 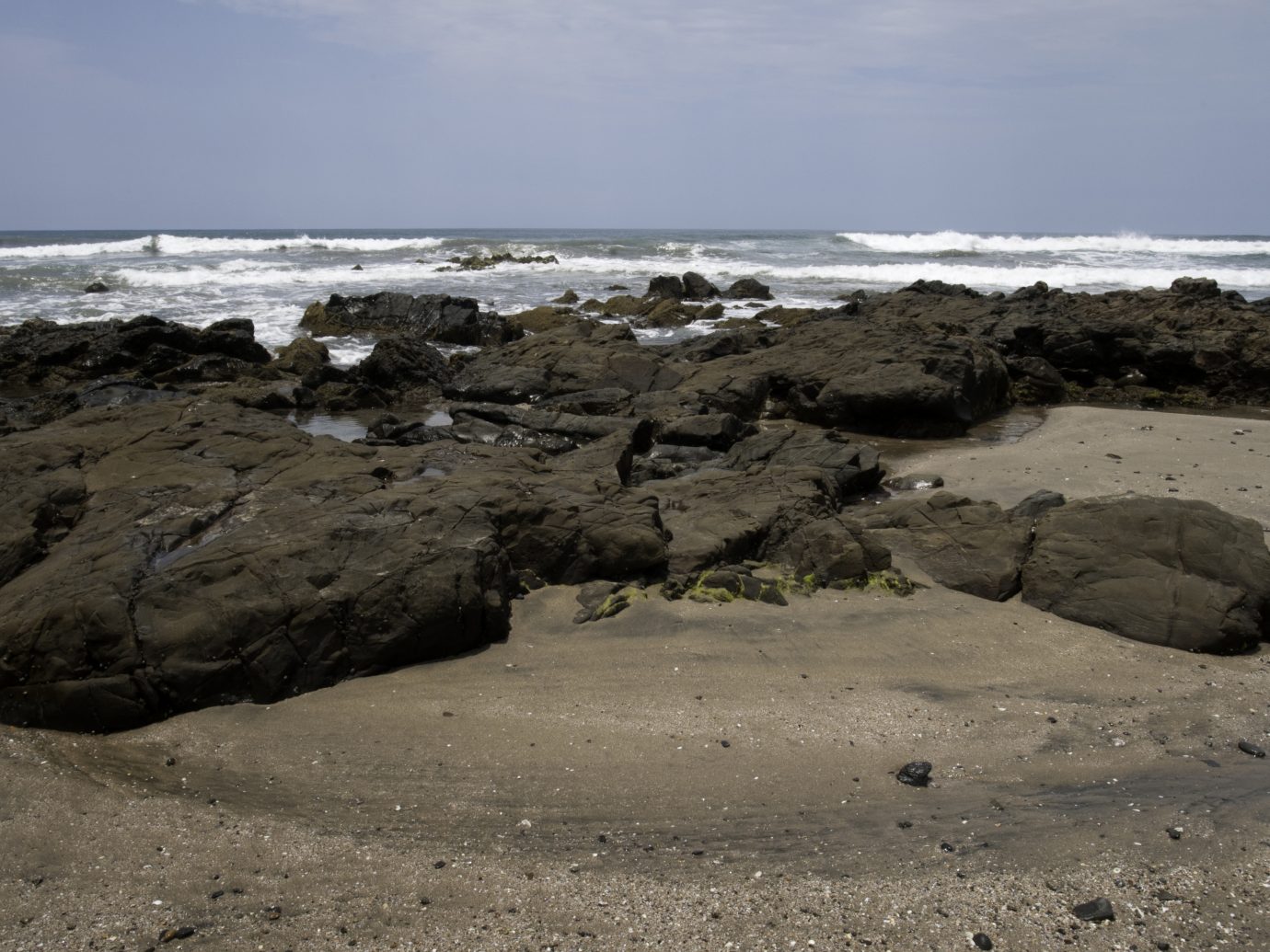 If you’re truly looking to go off the grid—not a tourist in sight—Troncones is as isolated as it gets. In the state of Guerrero, due north of Oaxaca, this undeveloped oceanfront community of 500 is a hush-hush haven for yogis and surfers alike. Get in touch with nature (and your inner self) at Present Moment, an oceanfront wellness retreat that has morning meditation, qigong, yoga, dance classes, and Thai massages as well as airy thatched bungalows to kick back in during down time. You’ll be sharing the three-mile beach with local equestrians and surfers hanging ten at Manzanillo Bay or La Saladita, which is nicknamed the “Wave Machine” for its perfect sets. Intrepid types can hike through the pine, oak, and aspen forests in the Sierra Madre mountains, kayak around La Boca Estuary with Costa Nativa Ecotours, spelunk down the limestone caves at Majahua Beach, or stroll the beach looking for sea turtle nests.

Smack dab between Tulum and Playa del Carmen, Akumal Beach is pleasantly surprising in that it’s not been overrun with flip flop-wearing shoobies. Because of this, the wildlife—turtles, stingrays, and tropical fish—hasn’t been scared off and can still be seen by snorkeling around the thriving coral reef. In fact, locals are fiercely protective of the animals and have cracked down on conservation efforts, so some areas can only be visited with a nature guide. Check out the Akumal Dive Shop to book a cenote scuba diving expedition, sunset sailing cruise, or bull shark swim.

Xcalak may as well be in Belize it’s so far down on the southern tip of Mexico’s Costa Maya. This small town is centered around the Xcalak National Reef Park in the Great Maya Reef. Although you could easily while away your days on the white-sand beaches, we suggest spending more time in the water as the area is known for its world-class diving, snorkeling, and deep sea fishing. Definitely don’t miss exploring bird island and the dense mangroves on a glass-bottomed kayak.

10 Hotels That Look Like They Are From Another Planet

9 Cool Things to Do in Nantucket