What to Do When Your Flight is Canceled

So you got to the airport on time only to find out your flight was canceled. What to do now (other than throw a small temper tantrum)? Let SmarterTravel contributor Ed Perkins teach you a thing or two about flight-cancellation rights.

Most airline passenger rights are established by government regulation, and, for that reason, they’re the same for all scheduled airlines. But you might be surprised to find that, in the U.S., no federal law or regulation specifies what, if any, rights you have when an airline cancels your flight.

With cancellations, your rights derive solely from the airlines’ contracts of carriage, plus relevant principles of general contract law. And because no federal regulations apply, those rights are not uniform but instead vary from airline to airline.

All airline contracts go to extremes to make sure you understand that, one, airlines do not guarantee schedules, and two, airlines are never responsible for consequential damages – losses you might suffer because you don’t arrive at your destination on time or at all.

But in a routine cancellation, you have two basic contractual rights on any airline, subject to minor variations: either one, a seat on your original airline’s next available flight, or two, a refund of the unused portion of your ticket. Some lines go beyond those bare-bones rights. In addition, most airlines promise various forms of assistance if they cancel your flight for a reason within the line’s control, but not when they cancel the flight because of bad weather or some other force majeure factor.

In 2015, only 1.59 percent of all U.S. domestic flights were canceled, and only about 0.3 percent were diverted to an airport other than the original destination. Though your odds of being canceled are slight, you can face some real hassles if you should get caught. 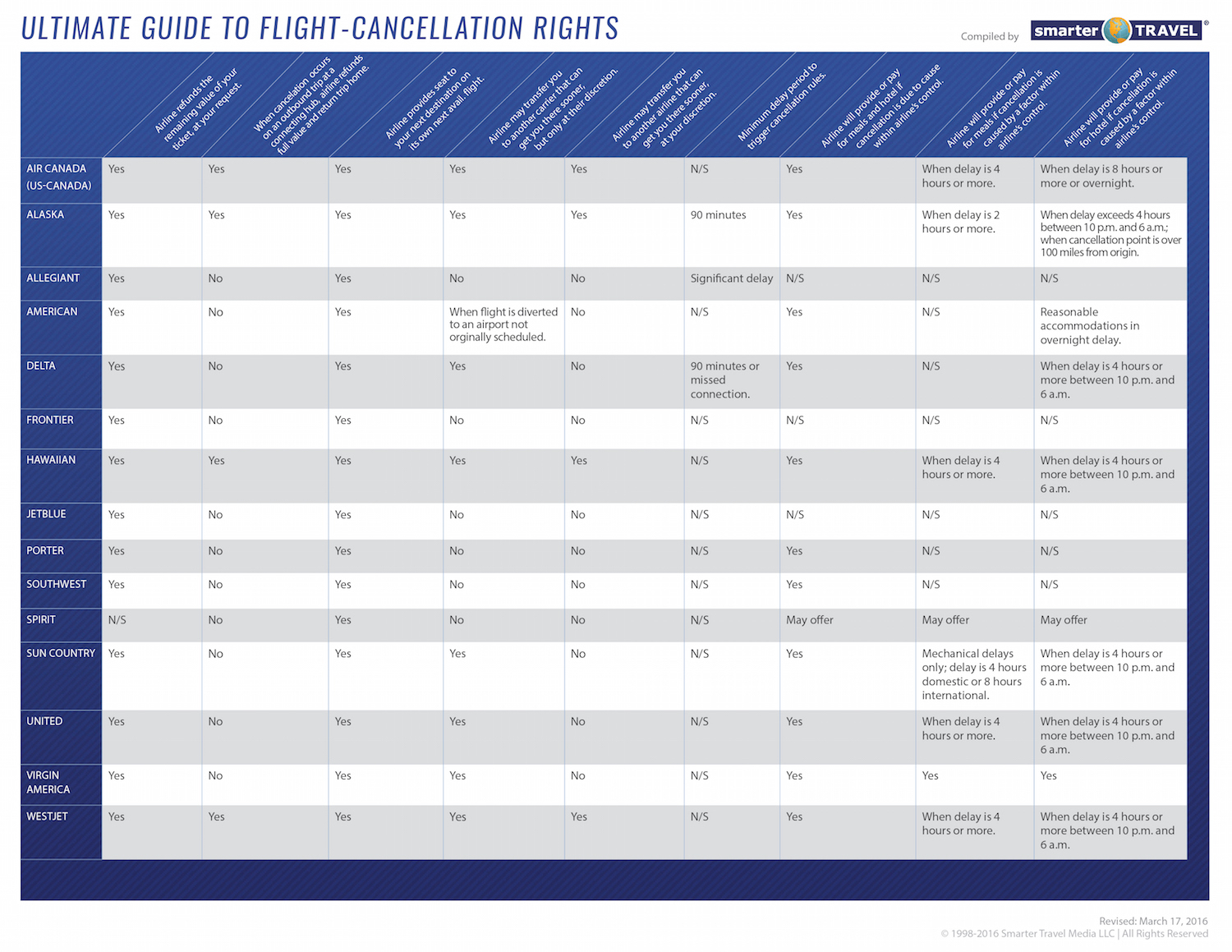 In general, airlines define cancellation pretty much as you’d expect. Some, however, limit cancellation procedures to cases where the airline can’t get you to your destination without a delay – either a "reasonable time," in some contracts, or a specific time, such as 90 minutes, in others.

The almost universal policy is that regardless of cause, when an airline cancels your flight, you have a right to a full refund of the remaining value of your ticket. Refunds are in the same form as ticket purchase: cash or credit to credit card.

A few airlines go beyond this basic requirement to include a provision that if your onward connecting flight from a hub airport is canceled on an outbound trip, and you no longer want to continue the trip, the airline will return you to your original airport at no charge and refund the entire value of the ticket.

A few lines’ contracts do not specifically promise a refund, but in practice a refund is almost always an option.

Most airline cancellation policies are built on the assumption that you really want to get you to your final destination as quickly as possible. But the extent of assistance varies. Almost all airline contracts promise to get you a seat on that airline’s next available flight to the ticketed destination at no extra cost. Lines with two or more classes generally specify a seat in the same class as ticketed, but most also say that if no seat is available in the original class, they will accommodate you in a higher class with no additional fare or in a lower class with a refund of the fare difference. A few lines specifically allow you to reroute yourself to an alternative nearby destination, but most don’t address that subject; instead, it’s negotiable. But you see substantial differences in whether an airline will try to get you a seat on another airline that can get you to your destination more quickly:

– Some airlines offer only the next available seat on their own line.

– Some offer to transfer you to another line (or ground transport) that can get you to your destination before they can get you there, but only at their "sole discretion."

– A few lines offer transfers at your request. This provision is the remaining trace of the former near-universal Rule 240 transfer procedure widely employed before deregulation.

All airlines consider airports they serve within a multi-airport region as equivalent destinations: Getting you to Newark, for example, is equivalent to getting you to JFK. Multi-airport regions in the U.S. are Chicago (O’Hare and Midway), Dallas-Ft Worth (International and Love Field), Houston (Bush and Hobby), Los Angeles (International, Burbank, Long Beach, Ontario, Orange County), New York (JFK, Newark, LaGuardia), San Francisco (International, Oakland, San Jose), and Washington (National, Dulles, and Baltimore). Some lines also conflate Ft Lauderdale, Miami, and West Palm Beach.

Contracts generally do not treat all the possible detail, one way or another. If for example, the next available seat is on a red-eye and you don’t want to endure a red-eye, contracts generally don’t say anything about finding a later seat on a better schedule. If the next seat to your original destination is not available within a reasonable time, most lines will agree to put you on an earlier available flight to a nearby destination: Philadelphia instead of New York/Newark, for example, or San Francisco rather than Sacramento. If you decide to abort a trip entirely, most contracts do not specify a limit to how far in the future they honor the "no fare change" provision. Sometimes you can negotiate something acceptable, sometimes not.

In general, if an airline cancels your flight because of some force majeure event outside the airlines’ control, your only rights are either a refund or the next available seat to your destination. Many airlines list force majeure events in their contracts; Delta’s list is typical:

But when a cancellation is due to a problem within an airline’s control—plane change, crew shortage, and such—most lines promise to tend to your needs in the event of an extended delay in finding an available seat. Typically, they offer:

– Meal vouchers for delays of four hours or more.

– Hotel accommodation for extended delays in finding an alternative seat. Some lines specify delay times of eight hours or more or for delays of four hours or more within the period of 10:00 pm to 6:00 am; others just say "significant" time. Some lines exclude hotel accommodations for delays at your home airport; others do not address this specifically but apply the principle in practice.

– Given today’s ubiquitous smart phones, the provision in many contracts that you get a free telephone call is an amusing anachronism. But it’s there in the remote case you don’t carry a mobile phone.

The table shows specific airline-by-airline variation in key provisions. Table data are based on contracts of carriage for domestic U.S. or Canadian travel as posted online in early 2016 and are subject to change. Policies vary in their degree of specificity; in general, where the contract does not address a situation, airline policies not subject to public inspection govern. And some situations are negotiable.

Cancellation Rules Outside the U.S. and Canada

– Alternative transport, including transport on other lines, or refund, including full refund and no-charge return to origin where appropriate.

– Except in cases of cancellation due to extraordinary conditions, financial compensation if a replacement seat delays you by three hours or more of if you get a refund, ranging from &euro350 to &euro600 depending on flight length (most flights to/from the U.S. and Canada fall into the top category).

EU regulations are vague about meals and accommodations.

Cancellation benefits in other countries vary, but tend to follow, at a minimum, the base formula of either a refund or the airline’s next seat.

Dealing with a Cancellation

There is not a single easy solution to a cancellation. In these days of high load factors, the next available seat may entail a substantial delay. But you can help yourself a bit with these tips:

– When an airline cancels a flight well before scheduled departure time, it often automatically rebooks you and notifies you by e-mail or a text to your phone. In general, if the airline’s solution is at all reasonable, take it; arranging something else is almost always a major hassle. If not, suggest your own alternative.

– With a last-minute cancellation, if you used a travel agent, contact the agency or its 24/7 backup, and have the agency arrange a substitute.

– Otherwise, get online, identify possible solutions, and present one or more solutions to the airline, either to its call center or to the agent dealing with problems on the spot, depending on circumstances. Many details unspecified in the contract are negotiable, and most agents would rather respond to a specific suggestion than start looking at all alternatives.

– If you’re involved in a cancellation outside the U.S. or Canada, ask to see a copy of the airline’s contract of carriage or equivalent customer commitment document to see what the airline does and does not promise.

– Keep your cool: The agent dealing with you at a busy airport didn’t cause the cancellation and can’t offer seats that aren’t there. Getting aggressive is likely to gain you less assistance, not more.

Read the original story: Flight Cancellation Rights: The Ultimate Guide by Ed Perkins, who is a regular contributor to SmarterTravel.

Editor’s Note: The cancellations chart was updated on March 17, 2016.

An Insider’s Guide to the Most Iconic Spots in Paris

8 Things Every Traveler Should Know Before Going to Cancun