Madrid, Barcelona, and Basque Country may be Spain’s most classic destinations, but the country’s south boasts plenty of places worth planning a trip to. Ancient Roman ruins, glittering Mediterranean beaches, Moorish palaces, luxurious resorts, flamenco performances, and rustic tabernas are just some of the marvels that await you in this picturesque corner of the country. Here are seven incredible places that will ignite your wanderlust and provide fuel for planning your next trip to Spain. 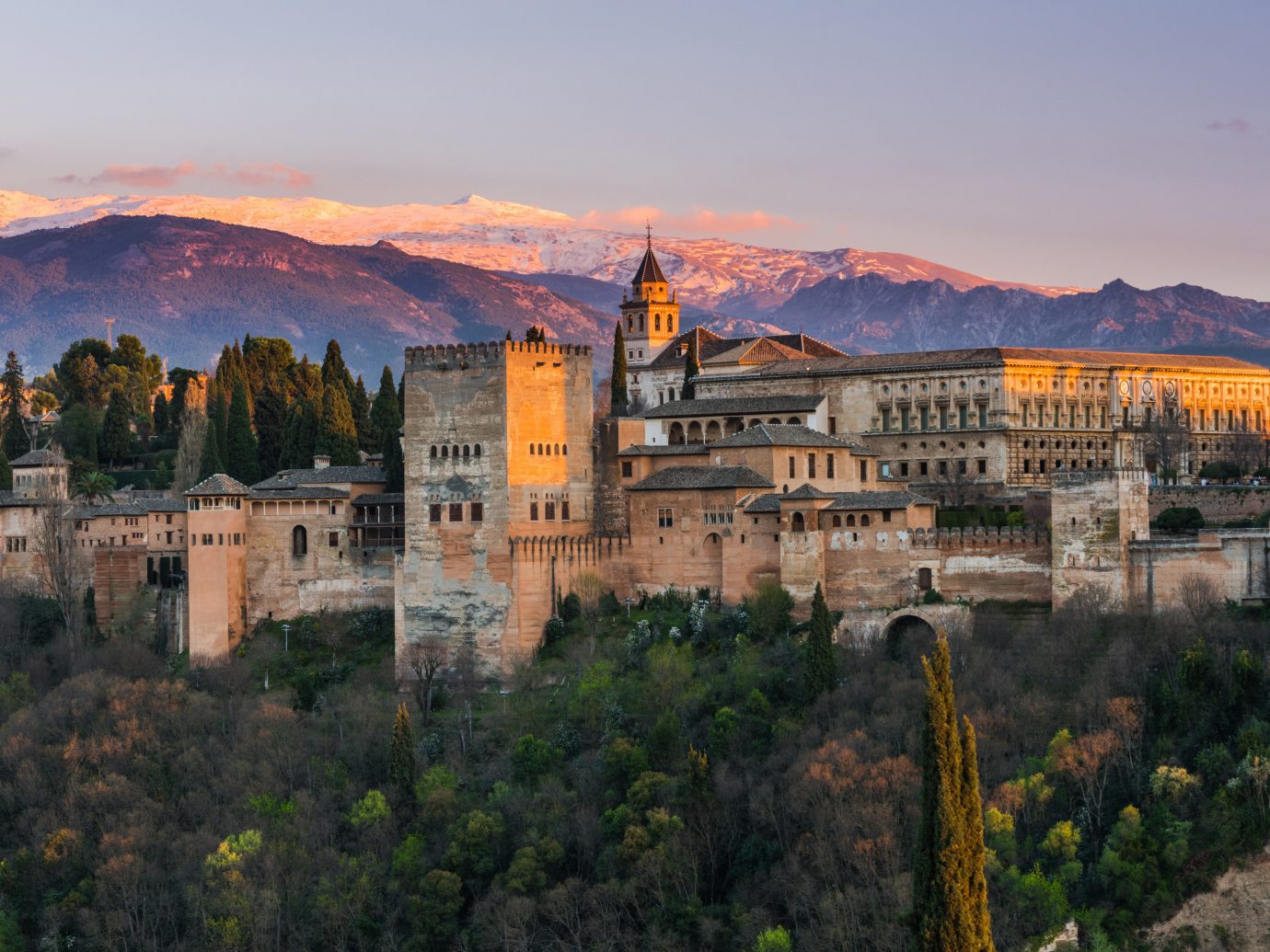 If there’s one monument you must see in Southern Spain, it’s the Alhambra. Originally built during the 13th and 14th centuries on a plateau overlooking Granada, this Moorish fortress turned royal residence—now a UNECO World Heritage site—is a sprawling maze of courtyards, gardens, halls, and residences transformed over the centuries by Spain's shifting rulers. A former mosque is now a church, portions were rebuilt in the Renaissance style, and the Palacio de Carlos V is now home to two museums filled with art, ceramics, and other relics from the Alhambra's earliest days. Even without the museums, you could easily spend all day admiring the complex's many intricately carved arches, mosaic tiles, sculpted fountains, and Sierra Nevada mountain views. Continue the history lesson by checking into the Hospes Palacio de los Patos, a 19th-century palace turned hotel in the heart of Granada that juxtaposes its historic architecture (rose windows; trompe l'oeil ceilings) with sleek design details including a underground spa and indoor pool, chic guest rooms (think designer chairs and monochrome rugs), and a destination restaurant serving up some of the best Spanish cuisine in town.

It's impossible not to be enchanted by Andalucía’s capital city, what with its fascinating history, fabulously warm weather, endless flamenco performances, and incredible food. Start by visiting the Real Alcázar, a Moorish palace complex featured in Game of Thrones that was originally built as a fort in 913 and redeveloped many times over the centuries. One of the oldest existing palaces still in use, it remains the best example of Mudejar architectural style in all of Spain. After a tour, your next stop should be El Rinconcillo, Seville’s most historic taberna, for Andalucian tapas and wine. Sleep off the calories at the Hotel Alfonso XIII, a Luxury Collection Hotel: constructed in 1929 by King Alfonso XIII, it's a masterpiece of Moorish architecture and design (we're talking colorful frescoes, dramatic arches, stained glass, and a colonnaded courtyard) and the city's most glamorous stay. Otherwise, follow the "it" crowd (i.e. wealthy locals and bullfighters) to the Gran Meliá Colón, which offsets its grand marble staircase and domed lobby with modern guest rooms— think gold headboards and Philippe Starck armchairs—and a sexy rooftop pool.

RELATED: 10 Most Charming Towns in Spain 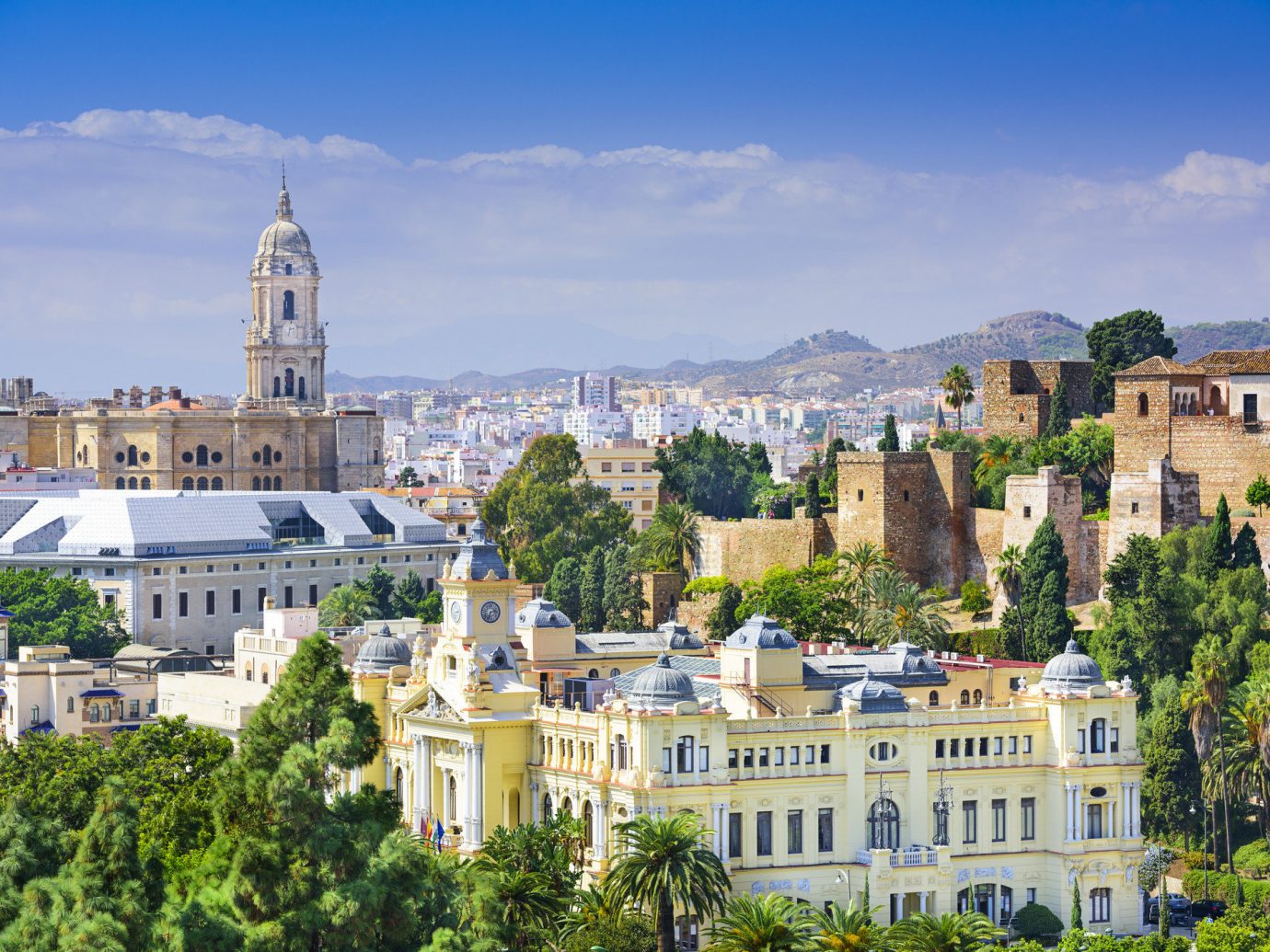 Picasso may be Málaga's biggest claim to fame (it was his birthplace, after all), but there are plenty of other reasons to visit this culture-rich coastal town. Art lovers will have their work cut out for them thanks to an impressive roster of museums including the Museo Carmen Thyssen Málaga, the Centre de Arte Contemporaneo de Málaga, an outpost of Paris’s Centre Pompidou, and, of course, the Museo Picasso Málaga, which received a refresh last year. After all that gallery hopping, take a relaxing stroll down La Malagueta beach, then check in at the Cervantes Theater to see what flamenco or ballet performances are on the night's agenda. Check in at the Gran Hotel Miramar—a beacon of style and luxury known for its excellent service that's been welcoming European nobility, artists, and intellectuals ever since it opened back in 1926. 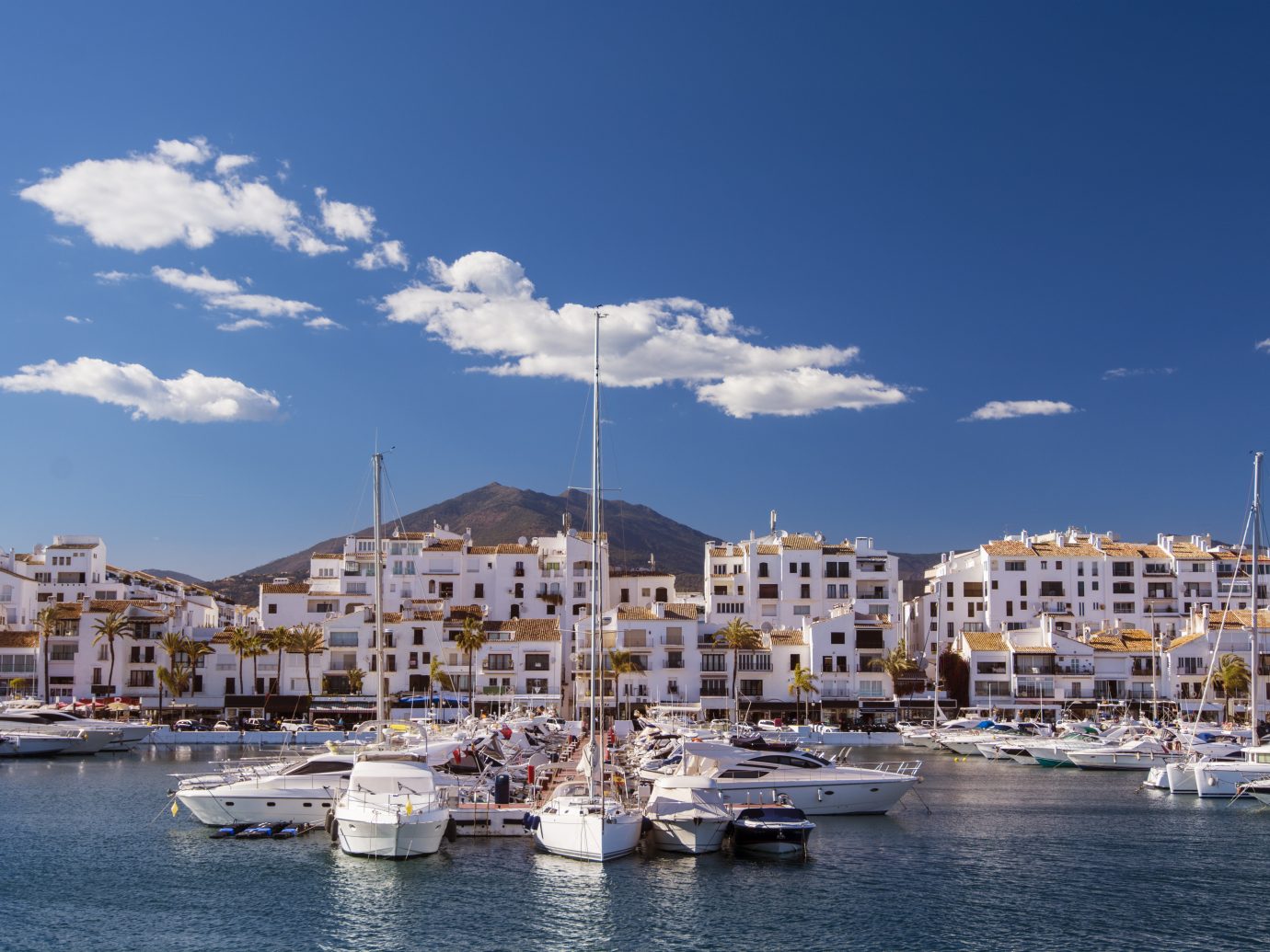 This resort town on the Costa del Sol was made famous in the 1950s by movie stars and the international jet set, and it’s been a favorite of the wealthy ever since. Multi-million-dollar mansions and grand hotels line the waterfront, where luxury yachts crowd into the marina all summer long. It’s here that world-famous chef and hotelier Nobu Matsuhisa recently unveiled the Nobu Hotel Marbella with an outpost of his eponymous restaurant and a glitzy nightclub. Prefer something a bit more classic? The opulent Marbella Club Hotel, Golf Resort & Spa, opened in 1950 by Prince Alfonso von Hohenlohe, boasts nine bars and restaurants, a world-class spa, golf course, and horse stables on the Golden Mile. 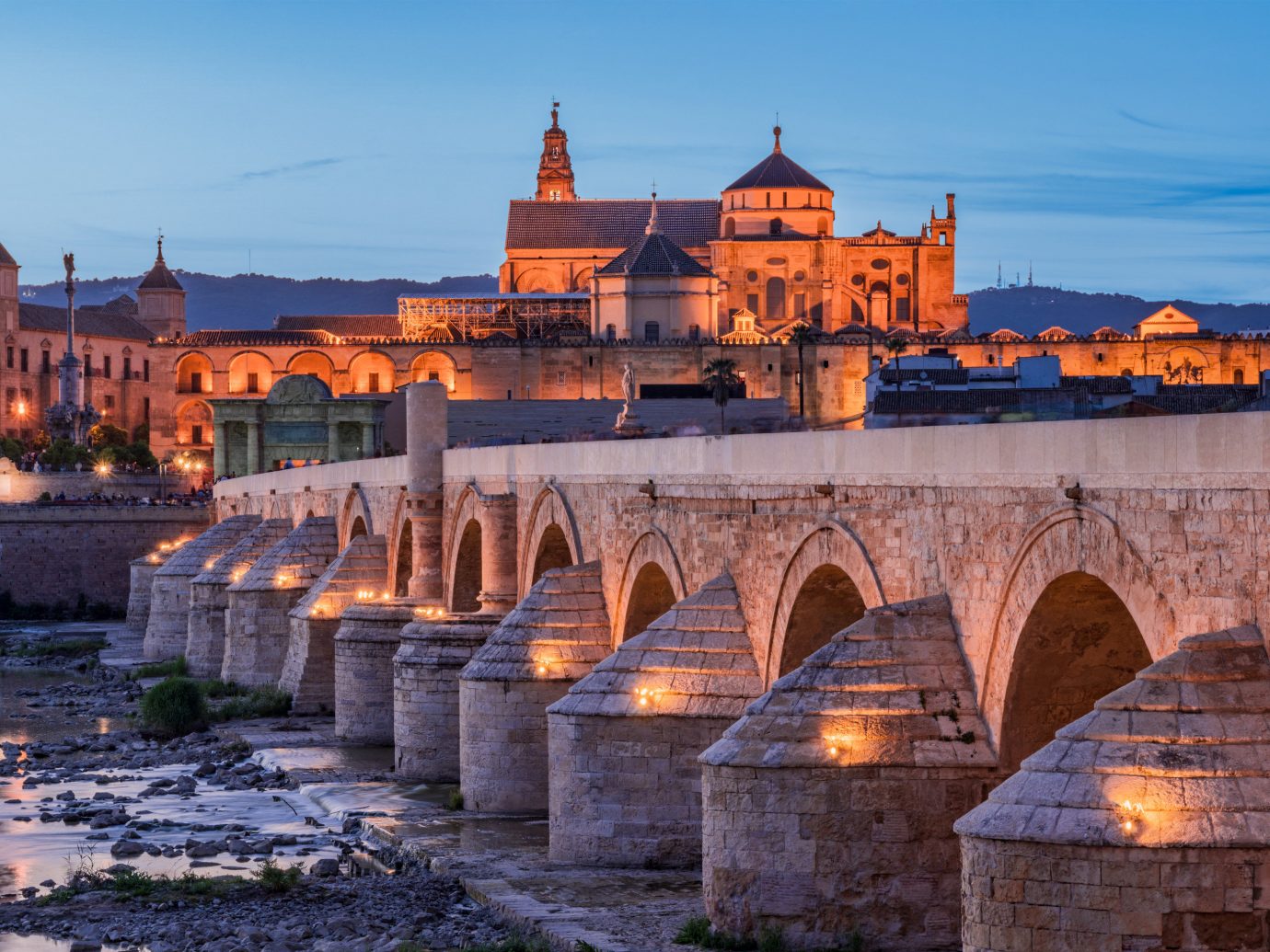 About 80 miles northeast of Seville, the ancient city of Córdoba boasts some of Spain’s best preserved Islamic architecture, though you’ll find influences from the Romans, Jews, and Christians as well. La Mezquita—the city’s iconic mosque-turned-cathedral—exemplifies the style with its candy-striped arches and gilded interiors. Delve even deeper into the city’s history at the Alcazar, the palace where Christopher Columbus met with King Fernando and Queen Isabella before setting off on his famed journey. After a day of sightseeing, chill out at the Hospes Palacio del Bailío, a member of Design Hotels in a restored 16th-century palace in the city center featuring thermal Roman baths in its spa and a show-stopping courtyard restaurant where you can peek at ancient Roman ruins beneath the glass floor.

This ancient port city—a jumble of whitewashed houses and pastel-hued buildings jutting out into the Atlantic—was founded by the Phoenicians in 1,100 B.C., making it one of Europe’s oldest continually inhabited cities. You could easily laze away your days here sunbathing, swimming, and feasting on fresh seafood hauled up by local fisherman at its many beaches, but it's worth setting aside some time to wander the city's narrow lanes and visiting its recently discovered Roman amphitheater, which was built by Julius Caesar's personal friend and advisor Lucius Cornelius Balbus. 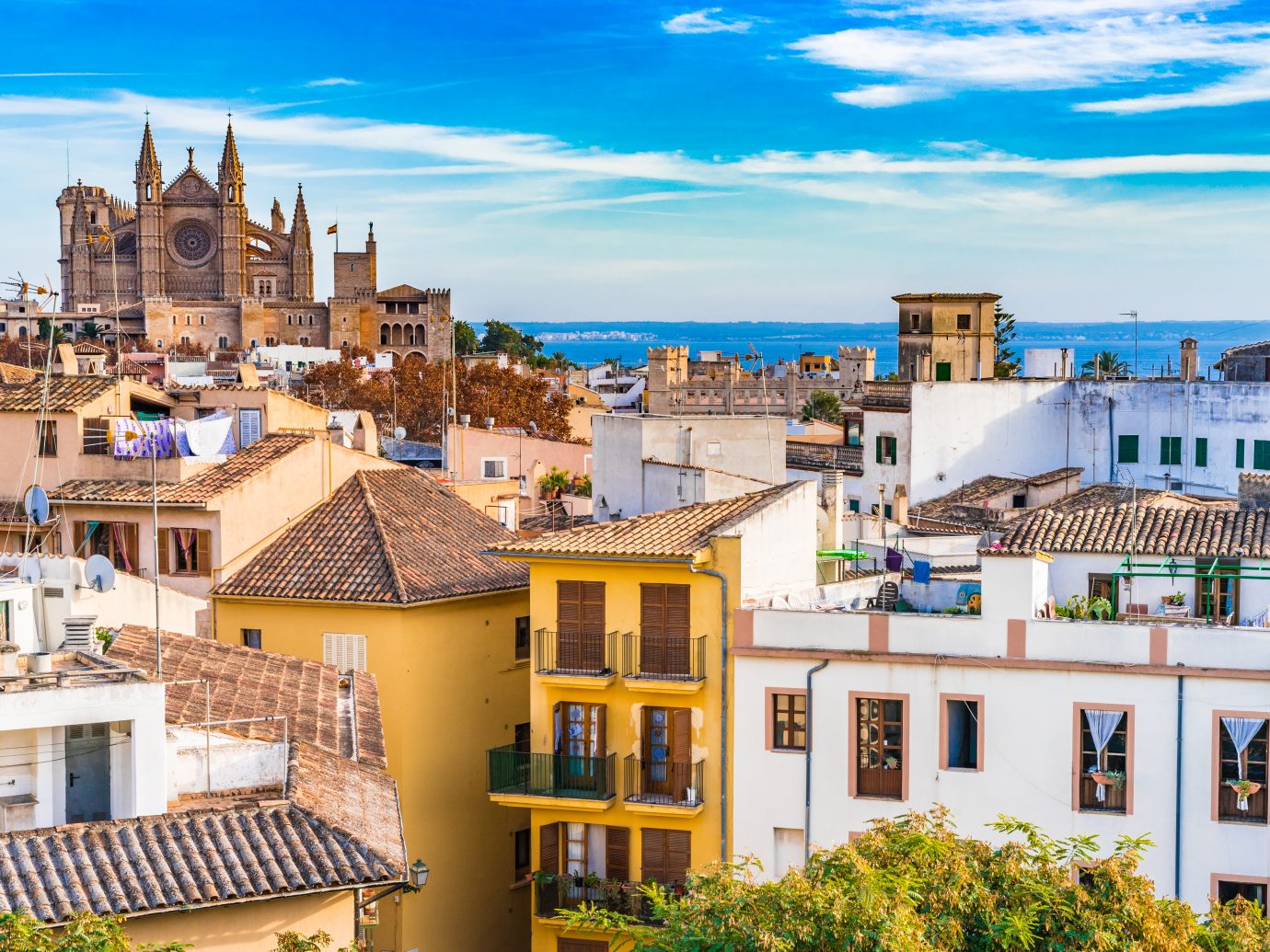 Located off Spain’s east coast, the Balearic Islands each have their own flavor. Ibiza may be a notorious nightlife hotspot drawing world-famous DJs, but it also has a surprising wellness-focused side. Mallorca, the largest island, has attractions ranging from the impressive city of Palma to remote hidden coves and picturesque hilltop towns like Deià. Mallorca's sister island, Menorca, is sometimes considered the most laid-back island owing to its picture-perfect beaches, rugged landscapes, and a complete absence of wild nightclubs. Formentera, the smallest inhabited island of the bunch, is perfect for people who want to spend their entire vacation barefoot, whether on the beaches or aboard the yachts that cluster here.

Book Hotels in the Balearic Islands

Women’s Dress in the Sun Outfit for Spain

Women’s Outfit for the Most Beautiful European Places

Men’s Outfit for the Most Beautiful European Places

Women’s Swimwear for an All-Inclusive Resort in the Bahamas

Men’s Swimwear for your Stay in Turks and Caicos

Not sure what to pack for a trip to Southern Spain? Here's a few ideas.

The Most Instagrammable Cafés in Paris Worth Planning a Trip Around

The Trip Every Art Lover NEEDS to Take in 2020